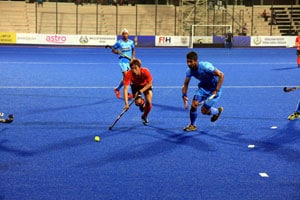 India rode on goals from Raghunath (6th minute) and Mandeep Singh (65th) to get the better of South Korea in an Asia Cup pool B league match in Ipoh on Monday evening. The 2-0 win takes India to the top of their group with six points from two matches. India had pumped in eight goals without reply in their first match against Oman on Saturday.

Monday's win guarantees India a berth in the semifinals. The two-time former champions are scheduled to play minnows Bangladesh on Wednesday and a victory will mean India will avoid a semifinal meeting with arch-rivals Pakistan, who became the first team to make the round of last-four after beating hosts Malaysia 4-1 on Sunday.

India must win the Asia Cup to qualify for the 2014 World Cup in The Hague. With at least five top stars missing from their line-up, a young team under Dutch coach Roelant Oltmans is under pressure to deliver.

At Ipoh's Sultan Azlan Shah Stadium on Monday, India were lucky to come away with full points against a rampaging Korean side who did all but score. Goalkeeper Sreejesh had an outstanding day, making at least five wonderful saves to earn the Man of the Match award.

India took an early lead in the sixth minute with Raghunath scoring from a penalty corner. It was the only short corner that came India's way in the entire match. The Koreans wasted five short corners in the contest and all of them in the first half. India defended well with Rupinderpal Singh and Gurmail Singh spoiling the Korean rhythm with timely interceptions. Sreejesh, of course, stood like the Chinese Wall.

In spite of territorial advantage and more ball possession, Korea failed to score. After having their backs to the wall, the Indians came out of their cocoon late in the second session. Mandeep struck with five minutes left for the hooter with a crisp shot from top of the circle after a diagonal Dharamvir pass split the Korean defence.

South Korea are the only Asian team to have qualified for the World Cup. The defending Asian Cup champions got the monkey off their back after Argentina won the Pan American continental championship, which lifted the Koreans from among the first reserves to become the eighth team to qualify for the premier event.

Comments
Topics mentioned in this article
Mandeep Singh Hockey Deccan Chargers Royal Challengers Bangalore Kings XI Punjab
Get the latest Cricket news, check out the India cricket schedule, Cricket live score . Like us on Facebook or follow us on Twitter for more sports updates. You can also download the NDTV Cricket app for Android or iOS.