Woods scrambles to 69, trails Rose by four at Arnold Palmer

England's Rose, playing alongside Woods, opened with a 65. His seven-under effort included an eagle and six birdies - including a stretch of four in a row from the fourth. 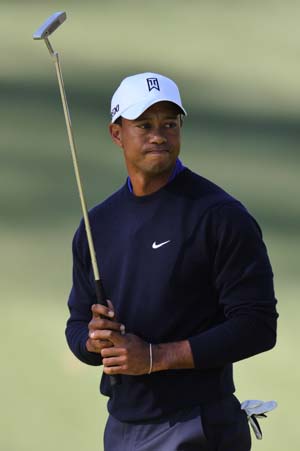 Tiger Woods, chasing Rory McIlroy for golf's world No. 1 ranking, scrambled to a 69 on Thursday that left him four shots off the first-round lead of Justin Rose at Bay Hill.

Woods can overtake Northern Ireland's McIlroy atop the world rankings with a successful defence of his Bay Hill title. McIlroy isn't playing the event.

The 14-time major champion got off to an erratic start, hitting just eight fairways and 12 greens and needing 28 putts in a three-under-par first round of the $6.2 million US PGA Arnold Palmer Invitational.

"I didn't drive it well, didn't hit my irons well and didn't control my distances or trajectory well," said Woods, a seven-time winner of this event.

But he countered his three bogeys with an eagle at the par-five 16th and four birdies, including three in a row from the par-five fourth.

Several key par saves included one at his opening hole, the 10th, where his approach from a bunker was long. He chipped to within three feet and made the putt.

"I certainly didn't play my best, but I got around and made a few good saves out there," he said.

England's Rose, playing alongside Woods, opened with a 65. His seven-under effort included an eagle and six birdies - including a stretch of four in a row from the fourth.

He had a two-shot lead over American John Huh, whose five-under 67 included six birdies.

American John Rollins and Brad Fritsch of Canada were tied on 68, while Woods was in a group of 10 players on 69 that also included Japan's Ryo Ishikawa and Denmark's Thorbjorn Olesen.

Comments
Topics mentioned in this article
Rory McIlroy Justin Rose Tiger Woods Golf
Get the latest Cricket news, check out the India cricket schedule, Cricket live score . Like us on Facebook or follow us on Twitter for more sports updates. You can also download the NDTV Cricket app for Android or iOS.