Tiger Woods narrowly missed out on a fairytale victory in his return to competitive golf on Sunday after a final round birdie blitz came up short at the PNC Championship family tournament in Florida. 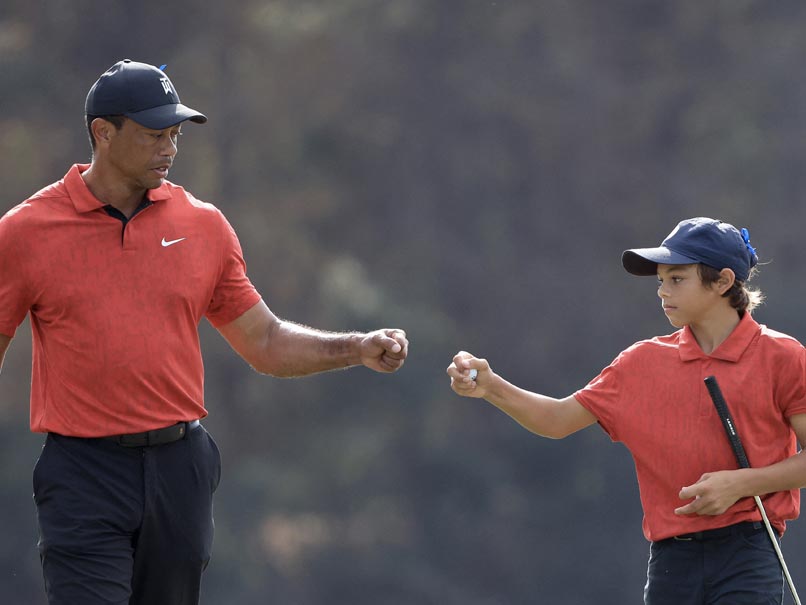 Tiger Woods narrowly missed out on a fairytale victory in his return to competitive golf on Sunday after a final round birdie blitz came up  short at the PNC Championship family tournament in Florida. Woods, playing in his first event since suffering career-threatening injuries in a car crash 10 months ago, reeled off 11 consecutive birdies alongside his 12-year-old son Charlie to card a 15-under-par 57 to finish on 25-under-par in the two-round tournament at the Ritz Carlton Golf Course in Orlando.

However the Woods duo were unable to close with a 12th birdie on the par-five 18th hole, settling for par and missing the chance to put the pressure on two-time major champion John Daly, playing with his son John Daly II.

The Daly duo eventually closed with a birdie to match the Woods's second-round 57 and finish on 27-under-par for a two-shot victory.

A weary Woods, who almost needed to have his shattered right leg amputated after his car crash in Los Angeles in February, said afterwards he was simply grateful to be playing again.

"I'm just happy and thankful that I'm able to do this," Woods told NBC television.

"I still have my own leg, which was questionable for a while, and it's functioning. I'm just really tired - I'm not used to this.

"I think this might be only my fourth or fifth round of golf this year. I'm a little worn out. It was nice to have a cart."

Woods said he and his son had set a pre-tournament target of playing two bogey-free rounds which they had achieved.

"Our whole goal for the two days was don't make any bogeys - last year we made two - and we didn't make any," Woods said.

"We felt we'd have to birdie every hole on the back nine to have a chance. It got interesting and a little tight towards the end, which was fun."

Woods, who returned from 2017 spinal fusion surgery to win his fifth Masters title, and 15th major crown, in 2019, has called this injury rehabilitation the hardest of many in his career.

He said this week that he had a "long way to go" to be able to return to top-flight golf, even on a part-time basis.

The 45-year-old said at his tournament in the Bahamas that he expects his post-accident career to mirror that of golfing great Ben Hogan, who was badly injured in a 1949 accident.

And he strongly disagreed with fellow pro Matt Kuchar's assessment that apart from his inability to walk the course his game was ready for PGA Tour-level competition.

"No, no, no, no," Woods said. "I totally disagree. I'm not at that level. I can't compete against these guys right now, no."

But this week in Orlando was a welcome chance to play with Charlie for the second year in a row.

"Even a couple of weeks ago we didn't really know whether or not I would be doing this, but here we are," Woods said. "And we just had the best time ever.

"I just wish I could have walked down the fairways with him and been side-by-side with him the entire time like we were last year.

"But I did what I could," added Woods, who said his "competitive juices" will never go away whatever his physical limitations.

"This is my environment," Woods said. "This is what I've done my entire life.

Woods said the two days gave him a better sense of what he can do, but he noted he didn't play a lot of draws and also found many of his shots coming up short.

"And then a few times I actually hit it solid and I smoked it over a couple of greens," he said. "I've got some work ahead of me."

John Daly, who won the 1991 PGA Championship and 1995 British Open, was teaming with John II, an 18-year-old playing his first season of collegiate golf at the University of Arkansas, for the sixth straight year in the event.

They grabbed their first win with 13 birdies and an eagle on Sunday.

The younger Daly admitted to some anxious moments when the Woods name popped up on the leaderboard right behind them.

"Obviously nervous," he said. "But we had the advantage because we were the last group, so we knew what we had to do on the last hole, or the last three holes, even."

Comments
Topics mentioned in this article
Tiger Woods Golf
Get the latest updates on SA vs IND 2021-22, check out the Schedule and Live Score . Like us on Facebook or follow us on Twitter for more sports updates. You can also download the NDTV Cricket app for Android or iOS.