There were no fist pumps for Tiger Woods, just a deep breath and a slow exhale. Jim Furyk walked most of the 7,170 yards at Olympic Club with his head down. David Toms couldn't think of a single shot he hit without his full attention on Friday. 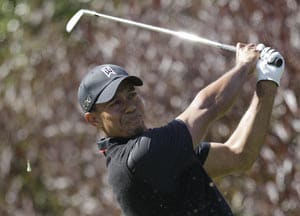 There were no fist pumps for Tiger Woods, just a deep breath and a slow exhale. Jim Furyk walked most of the 7,170 yards at Olympic Club with his head down. David Toms couldn't think of a single shot he hit without his full attention on Friday.

They were not the survivors of the U.S. Open. They were the leaders.

And it's no coincidence that all of them have been tested in the majors, none more often than Woods, who survived a patch of bogeys early in his round for an even-par 70 that took him another round closer to a 15th major title.

"I know that it takes a bit out of us, but so be it," Woods said. "Much rather be there than missing cuts or just making the cut. So it's a wonderful place to be with a chance to win your nation's open."

Just when this U.S. Open was starting to look like child's play, the trio of tested champions who took it back.

Woods overcame three straight bogeys on the front nine for an even-par 70. Furyk, nine years removed from his U.S. Open title outside Chicago, plodded his way around Olympic for a 1-under 69. Former PGA champion Toms kept a steady presence in his round of 70.

They were at 1-under 139. Everyone else in the field was over par.

And they restored some sanity to the toughest test in golf after a brief, stunning moment when 17-year-old Beau Hossler found himself alone in the lead. He went 11 holes without making a bogey until he got lost in the thick rough and the trees on the brutal front nine of Olympic and had to settle for a 73.

Defending champion Rory McIlroy missed the cut for the fourth time in his past five tournaments. A year after setting a U.S. Open record with a 131 through 36 holes, he bowed out Friday after a 73 which gave him a two-day score of 150.

It doesn't take much at this U.S. Open to swallow up even the best players.

Woods had to be close to his best simply to break par.

"That was not easy," Woods said. "That golf course was some kind of quick. ... You had to stay as patient as possible."

Graeme McDowell, the U.S. Open champion two years ago down the coast at Pebble Beach, dropped three shots on his last four holes for a 72. Even so, he was very much in the hunt two shots behind at 141, along with American John Peterson (70), Nicolas Colsaerts of Belgium (69) and Michael Thompson of the U.S., the first-round leader whose 75 was nine shots worse.

The only regret for Woods was having to settle for a share of the lead.

When he drew level with Furyk on the 13th with a 4-foot birdie putt, Woods was coming up on a series of holes that allowed players to at least think of making birdie. In a greenside bunker in two on the par-5 16th - shortened to 609 yards Friday - Woods blasted out weakly and missed a 12-foot putt. With a mid-iron in his hand in the fairway on the par-5 17th, he went over the green and down a deep slope. Despite a superb pitch to 8 feet, he missed the putt.

And with a wedge from the fairway on the 18th, he came up well short and into a bunker, having to settle for par.

Furyk rolled in a 40-foot birdie putt from off the third green in the morning, the highlight of his 69.

"Plod is a good word," Furyk said. "You take what the course gives you and play the best you can from there."

Woods is coming off his second win of the year two weeks ago at the Memorial, and hasn't lost a step. It might not show it in the scores, just the leaderboard.

Woods had won eight straight times when he had at least a share of the lead going into the weekend at the majors, a streak that ended at the 2009 PGA Championship when Y.E. Yang chased him down from four shots back. Woods hasn't seriously contended in the final hour of a major since.

"Whoever wins this golf tournament is going to be a great champion, somebody that's probably won events before, that can handle the emotions and can handle the adversity in a U.S. Open, and somebody with experience," Toms said. "Strange things can happen, but I would think that you would see a lot of that on the leaderboard come late Sunday."

And a stern test waits on the weekend. Asked for the likely winning score, McDowell deferred to the USGA.

"They can have whatever they want," McDowell said. "If they want 5 over to win, 10 over to win it ... they can hide these pins away. I would have to imagine around level par."

Before Woods moved to the top of the leaderboard, the cheers, mainly of disbelief, were for Hossler.

The kid in braces, who didn't even win his state high school championship, rolled in a 6-foot birdie putt on the 520-yard first hole, putting him alone in the lead at 2 under.

"Unfortunately," he said, "I kind of lost it coming in."

Hossler dropped a shot on the next hole, though the real trouble came when he pulled his tee shot on the fourth into the hay and made double bogey. Then, he hit into a bunker on the adjacent hole for another bogey, lost another shot on the sixth and only slowed the damage with a chip-in behind the seventh green for birdie.

He still gets to sleep in on Saturday with his late tee time, and what 17-year-old doesn't like that?

Comments
Topics mentioned in this article
Golf Leander Paes Maria Sharapova Sania Mirza Tiger Woods Jim Furyk
Get the latest Cricket news, check out the India cricket schedule, Cricket live score . Like us on Facebook or follow us on Twitter for more sports updates. You can also download the NDTV Cricket app for Android or iOS.