Tiger Woods in the mix at Australian Open

Tiger Woods played his first bogey-free round in nine months, a big development in any tournament he plays. 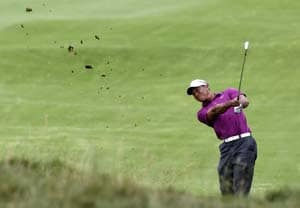 Tiger Woods played his first bogey-free round in nine months, a big development in any tournament he plays. It nearly got lost Thursday in the Australian Open, which featured an albatross from Adam Scott and another meltdown for John Daly.

Jarrod Lyle had a 7-under 65 at The Lakes for a one-shot lead over Dustin Johnson and Nick Watney, two of the eight Americans warming up for the Presidents Cup next week.

Thousands of fans who stood atop sand dunes had reason to be impressed with Woods in his first tournament at Sydney in 15 years. He hit the ball clean, usually where he was aiming and rarely got in trouble in blustery conditions for a 4-under 68, his lowest score to par in the first round of any tournament this year.

The last time he played bogey-free was the second round of the Dubai Desert Classic on February 11.

"I hit it really good today," Woods said. "It was rewarding that I hit them just like I have at home."

Even so, most of the fans following him missed all the excitement.

There was quite a buzz as Woods headed to the eighth tee. The gallery looked down the fairway on the 550-yard par 5 to see Scott celebrating a 6-iron from 220 yards downwind that landed 10 feet in front of the cup and went in for an albatross. That helped the Australian overcome a sloppy start and sent him to a 69.

It was his first albatross since he was 17 in the Greg Norman Junior Masters.

"That's quite a while between drinks," Scott said. "It gave me a boost, for sure. There were a lot of people there, and a lot of hands went in the air."

Two groups behind Woods was Daly, who doesn't have a pretty record Down Under and it got downright ugly.

It started on the short par-4 10th when Daly tried to drive the green. He thought his ball was in the front bunker, but after blasting out to about 4 feet, he realized he had hit a practice ball from the adjacent range. That's when he was told his ball was in the back bunker, and with a penalty shot and a three-putt, he wound up with a triple bogey.

Daly was annoyed, he then hit his second on the par-5 11th into the water. Then he hit another into the lake. And another. And another. The final tally was seven balls, and it might have been more except that he had none left in his bag.

Daly turned over his scorecard to Hunter Mahan and Craig Parry and walked off the course. Daly later said on Twitter, "when u run out of balls u run out of balls. yes, I shook my player's partners hands & signed my card w/rules official."

In 2002, Daly threw his putter into the pond and failed to sign for a 78 at the Australian PGA, and was fined $5,600. Two years ago, he smashed a spectator's camera into a tree at Royal Sydney during the Australian Open.

The rap sheet is even longer in the United States, from his 18 on the sixth hole at Bay Hill to the time he swatted a moving ball on the turtleback greens of Pinehurst No. 2 in the 1999 U.S. Open.

"You always hear a story about John Daly doing something," Mahan said. "Right in the middle of it. Great."

Parry came to Daly's defense, saying he had the right club to reach the 11th green, but failed to realize the strength of the wind.

Tour officials sounded as though they had seen enough. Brian Thorburn, chief executive of the PGA of Australia, said it was withdrawing its invitation for Daly to play in the Australian PGA in two weeks at Coolum.

"The PGA does not need this kind of behavior tarnishing the achievements of other players and the reputation of our tournaments," Thorburn said in a statement. "John is not welcome at Coolum."

Thursday was a welcome sight for Woods.

He caught the worst of the weather, with a 20 mph wind strong enough to shoo away clouds and put a premium on accuracy. Good scores were posted earlier in the day, starting with the 65 by Lyle.

Johnson had a sluggish start, only to turn it around with five straight birdies, most of them from inside 4 feet. Another guy headed to the Presidents Cup also fared well, even if he won't be competing next week. That would be U.S. captain Fred Couples, who had a 67.

Woods was in serious trouble off the tee only once, and hit a bullet under a tree and through the green that allowed him to save par on the third hole. Another poor tee shot wound up in the adjacent fairway on the par-5 eighth, but that led to his first birdie of the day.

The opening seven holes at The Lakes is a matter of hanging on, with the scoring holes starting at No. 8. Woods started the back nine with consecutive birdies, then picked up another on the par-4 13th with a beautiful bunker shot to a tough green. He failed to birdie two of the par 5s on the back nine, three-putting from the back of the 14th green, and pulling his second shot on the 17th, lucky for the kikuya grass to grab the ball before it rolled down the bank and into the water.

He was three shots out of the lead, significant in that he has been taking himself out of mix early in the other tournaments he has played. This is an important stretch for Woods, who is playing the third time in a span of four weeks, his most golf activity since the spring.

"I'm in a good spot," Woods said. "Hopefully, the weather will be calm in the morning."

Comments
Topics mentioned in this article
John Daly Golf Tiger Woods
Get the latest Cricket news, check out the India cricket schedule, Cricket live score . Like us on Facebook or follow us on Twitter for more sports updates. You can also download the NDTV Cricket app for Android or iOS.