Thongchai Jaidee, who holds 13 victories on the Asian Tour, ensured he would find his way back into contention at the $8.5 million event by mixing his card with six birdies against two bogeys for a two-day total of even-par 144. 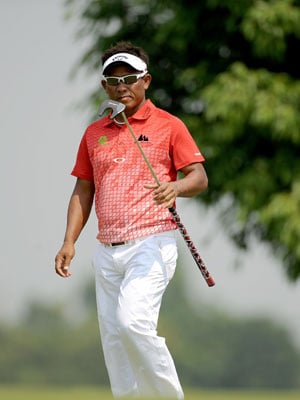 Three-time Asian Tour Order of Merit winner Thongchai Jaidee of Thailand showed why he can never be written off when he made up for his disappointing opening performance with a second round four-under-par 68 at the WGC-HSBC Champions here on Friday.

The decorated Thai, who holds 13 victories on the Asian Tour, struggled with a first round 76 at the Sheshan International Golf Club. However, he ensured he would find his way back into contention at the $8.5 million event by mixing his card with six birdies against two bogeys for a two-day total of even-par 144.

"It was a bad round yesterday and I had to get it out of my mind quickly. My ball striking and putting made all the difference today. I holed lots of putts and only three-putted once today. I managed to find most of the fairways and overall I'm happy that I managed to make a good comeback," said the 43-year-old.

While Thongchai was left to soak in the positives, compatriot Kiradech Aphibarnrat had a day to forget when he slumped to a 78.

The current Asian Tour Order of Merit leader started the day four shots back of first round leader Rory McIlroy but found himself staring at a disastrous card that was marked with two birdies, six bogeys and one double-bogey.

Comments
Topics mentioned in this article
Golf Lee Westwood S.S.P. Chowrasia Thongchai Jaidee
Get the latest Cricket news, check out the India cricket schedule, Cricket live score . Like us on Facebook or follow us on Twitter for more sports updates. You can also download the NDTV Cricket app for Android or iOS.