The three-time Asian Tour number one finished ninth on the final Race to Dubai rankings in the recently concluded European season, but the Thai home hero is keen to win for the first time this year in front of his fans at Amata Spring Country Club. 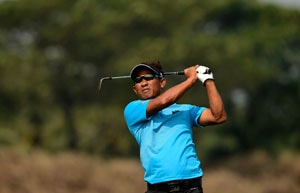 Calling this season one of the best year of his life, Thai veteran star Thongchai Jaidee hopes to put the icing on the cake by securing a home victory at the Thailand Golf Championship which starts on Thursday.

The three-time Asian Tour number one finished ninth on the final Race to Dubai rankings in the recently concluded European season but as satisfying as it was for him, the Thai home hero is keen to win for the first time this year in front of his fans at Amata Spring Country Club.

"I think this year I played well. I didn't win but I have gained a lot of confidence. I finished second in the World Match Play (in Bulgaria) and other second in the BMW Masters in China. I think it's the best year of my life playing on the European Tour. I'll try to win this week," said Thongchai.

He credited his superb season, which has seen him rise up to 46th in the world, down to his putting and also staying injury free.

"I think I've had my injuries a few years ago," said Thongchai. "Previously, my putting was so bad too. I'm feeling very confident with the putting now. That's the key change. I'm confident and if I miss the green, I can chip and make a good putt.

"We have tried to change my thinking with the putting. I'm now using the normal one, the short putter and in the past couple of months, I have played well in China and then finished last week top 10 again" added the Thai, who was recently named playing captain of Team Asia for the inaugural EurAsia Cup in Malaysia next March.

"I think this event, it's the best tournament in my home country. We have a strong field, like the world No.3 is here and so is the world No.4. it's good for our country to have a tournament like this. And also, myself, it's nice to be back home. We have not many tournaments to play at home," he said.

"I think this one is my second tournament back home this season and I want to enjoy the tournament. I think my performance is getting better. I'm hitting the ball a lot better," he added.