Phil Mickelson of the United States won his first British Open at Muirfield on Sunday by three strokes from Henrik Stenson of Sweden. 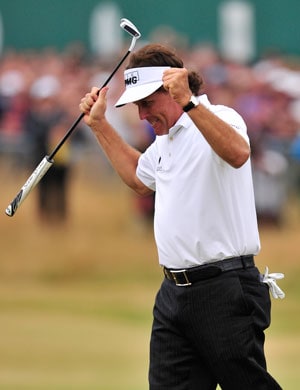 Phil Mickelson won the British Open at Muirfield on Sunday with a superb final round of 66.

The 43-year-old American won with a three under total of 281, three strokes clear of Henrik Stenson who had a closing 70.

It came just one month after he had endured the heartbreak of a record sixth runner-up finish at the US Open behind Justin Rose.

"This is such an accomplishment. I never thought I could develop the game and shots to play links golf," said Mickelson.

"The greens were fast and firm. I played the best round of my life, I putted better than I have ever putted.

"I shot the round of my life."

Mickelson started the final round five strokes adrift of leader Westwood, but held steady going out and then stormed down the back nine in a superb 32 at a time when all of his rivals were stumbling in the tough conditions.

It was the third straight Open won by a golfer in their 40s with Ernie Els and Darren Clarke both 42 when they won at Royal Lytham and Royal St George's. respectively

Mickelson also became the first player in history to win the Scottish Open and then go on to win the British Open the following week.

Tiger Woods started the day tied for second, just two off the lead, but he failed to find any spark and his record of never having won a major when trailing after 54 holes held firm as he came in at two over 286 after a 74.

Comments
Topics mentioned in this article
Golf Phil Mickelson Shiv Kapur Lee Westwood Rory McIlroy Zach Johnson Tiger Woods
Get the latest updates on IPL 2020, check out the IPL Schedule for 2020 and Indian Premier League (IPL) Cricket live score . Like us on Facebook or follow us on Twitter for more sports updates. You can also download the NDTV Cricket app for Android or iOS.