Shiv Kapur was the best-placed Indian golfer at fourth after carding a blemish-free five-under 66 but it was Thai veteran Thaworn Wiratchant (66) who walked away with the top honours after clinching a thrilling play-off at the Hero Indian Open on Sunday. 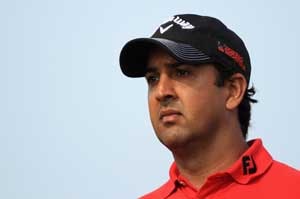 Shiv Kapur was the best-placed Indian golfer at fourth after carding a blemish-free five-under 66 but it was Thai veteran Thaworn Wiratchant (66) who walked away with the top honours after clinching a thrilling play-off at the Hero Indian Open on Sunday.

Another Indian, Anirban Lahiri, a two-time Asian Tour winner, Arnond Vongvanij of Thailand and Jaakko Makitalo of Finland were a further two shots back in fifth place.

Kapur, who has four top-five finishes on the Asian Tour this season, was delighted to continue his solid form where he posted a flawless round highlighted by five birdies.

"I'm happy but not satisfied. I just wanted to go out there and shoot my heart out. This is my national open and Hero is my sponsor. Obviously I would have liked to win but fourth is not bad. My streak of top-five continues," said Kapur.

Among other Indians in fray, Chiragh Kumar (68) finished tied eighth with a total of nine-under. Former champion Jyoti Randhawa (70) was a stroke adrift at tied 12th.

Wiratchant, who was playing one flight in front of Ramsay, birdied the last hole in regulation play when his seven iron approach shot landed about one feet from the hole as he closed with five-under-par 66 at the approximately USD 1.25 million Asian Tour event.

Overnight leader Ramsay needed a par putt on the last to win but made a three-putt bogey for a 68 as the duo returned to the par four 18th hole at the Karnataka Golf Association course.

On a day filled with drama, Ramsay blasted his tee shot into a watery creek and was penalised. His third shot landed in the back of the green and he chipped to about 10 feet past the hole as he two-putted for double bogey.

Meanwhile Wiratchant, who won the Hero Indian Open in 2005, made a two putt bogey for the win after hitting his second shot into the greenside bunker. He was stunned by his victory that propelled him to the top of the Asian Tour Order of Merit.

"To be honest, I didn't expect to win with the way I was driving the ball this week. It means a lot that I've won a second Hero Indian Open title and that I'm now leading the Asian Tour Order of Merit," said Wiratchant, who totalled 14-under-par 270.

Wiratchant, who was two shots off the lead at the start of the day, struggled with his driver but rallied with acute iron play and a sharp short game in a round of six birdies against one bogey.

Thai rising star Panuphol Pittayarat bogeyed the last hole to finish one shot from the play-off.

Comments
Topics mentioned in this article
Shiv Kapur Gaganjeet Bhullar Darren Clarke Mithun Perera Thaworn Wiratchant Golf
Get the latest Cricket news, check out the India cricket schedule, Cricket live score . Like us on Facebook or follow us on Twitter for more sports updates. You can also download the NDTV Cricket app for Android or iOS.