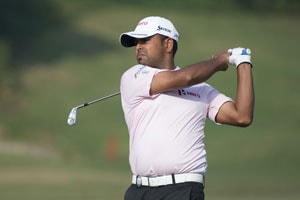 A tied-fourth finish in the Thailand Golf Championship enabled India's Anirban Lahiri to claim the 111th position in the Official World Golf Ranking (OWGR) while Shiv Kapur (143rd) and Ganganjeet Bhullar (148th) also made it to the list of top 200.

Bhullar's rise in the rankings was due to his win in the recently-concluded Indonesia Open.

These three Indians represent the 13 Asian Tour members in the list of top-200 in the OWGR, with Thailand's Thongchai Jaidee leading the way in the 46th position.

Thongchai, who was ranked 80th at the end of 2012, made huge strides to finish 2013 at the 46th position, courtesy his tied 10th result at the Thailand golf Championship on Sunday. Having finished inside top-50, Thongchai earned the opportunity to play at the Masters Tournament next year.

Another talent from Thailand, Kiradech Aphibarnrat, the current Asian Tour Order of Merit leader, is ranked 59th in the world, thanks to his victory at the Maybank Malaysian Open in March.

Malaysia's Nicholas Fung took a giant leap when he moved up from 1416th rank to 235 in a span of 12 months. He did so by claiming 33.24 world ranking points via good performances on the Asian Tour and Asian Development Tour.

He posted two top-five results on the region's premier Tour which is celebrating its milestone 10th season in 2013.

The ranking points are crucial for golfers to qualify for the 2016 Olympics in Rio de Janeiro as the elite 60-man field will be decided based on the world rankings.

With the inaugural EurAsia Cup, the Asian Tour players will also jostle for a spot in the Asian team, which is captained by Thongchai.