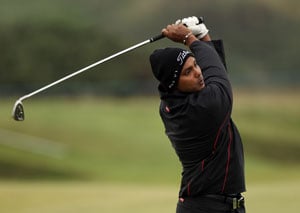 SSP Chowrasia turned in a flawless back-nine in windswept conditions to open with a two-under 70 that placed him tied 11th at the end of the first round at the Volvo China Open on the European Tour on Thursday.

Chowrasia, who was 11th at the Ballantine's Open last week, was four shots behind leader Robert-Jan Derksen, last week's winner, Brett Rumford and Thai Kiradech Aphinabarnrat, all of whom shot 68 each.

Jeev had three birdies, two of them on first and second. He followed that with back-to-back bogeys on fourth and fifth. He had one birdie and bogey.

Bhullar had four bogeys, but he also had two double bogeys and two other bogeys in his 74 and will need a solid second round to make the cut.

Derksen's last Tour title came eight years ago, at the Madeira Islands Open. He is without a top-10 on European Tour for last two years. Derksen shot a 66 with eight birdies with two bogeys.

Kirtadech had five birdies and one bogey, while Rumford and Jacquelin had a clean card with four birdies and no bogeys.

Among the group of players one shot back on three under par is Scotland's Paul Lawrie, who carded four birdies and a solitary bogey.

Comments
Topics mentioned in this article
S.S.P. Chowrasia Golf
Get the latest updates on ICC T20 Worldcup 2022 and CWG 2022 check out the Schedule, Live Score and Medals Tally. Like us on Facebook or follow us on Twitter for more sports updates. You can also download the NDTV Cricket app for Android or iOS.