Mithun was on the verge of creating history at the Asian Tour season-opening event in Myanmar but was pipped to second place by Order of Merit leader, Chawalit Plaphol of Thailand. 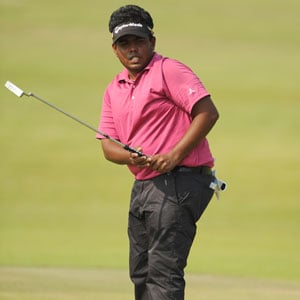 Sri Lanka's Mithun Perera is confident of winning his first Asian Tour title when the 1.8 million euro Avantha Masters gets underway at the Jaypee Greens Golf Course in Noida on Thursday.

The talented Sri Lankan was on the verge of creating history at the Asian Tour season-opening event in Myanmar but was pipped to second place by Order of Merit leader, Chawalit Plaphol of Thailand.

While Mithun could have been the first Sri Lankan to win on the Asian Tour then, he will have another shot at glory at this week's Avantha Masters, which is tri-sanctioned by the Asian Tour, European Tour and Professional Golf Tour of India (PGTI).

"That result in Myanmar really gave me lots of confidence as that has kept up my rankings on the Asian Tour. I feel proud to be the first Sri Lankan to hold a full card on the Asian Tour and my target is to win at least one event this year. It's so near," said Mithun.

With his recent form, the Sri Lankan is confident that he can do better than his debut performance when he finished tied-29th last year.

"I had a good finish at the Avantha Masters last year and it's really exciting to be back again. There are many good players this week and it will be great to play against them," said Mithun, who is the son to Nandasena, a famous name on the old Asian circuit during the 1980s and 1990s.

As the flag bearer for golf in Sri Lanka today, Mithun also hopes he can serve as an inspiration for his fellow countrymen and take golf in his country to greater heights.

"A lot of Sri Lankans are following the Asian Tour as a result of my performances and many of them have been supporting me back home. They've been following my progress closely and cheering me every step of the way. I want to make my country proud and that's why I'm also here," he said.

A stellar field that consist of no fewer than 38 Asian Tour winners including three Order of Merit champions is poised to make the Avantha Masters an intriguing contest as a host of Ryder Cup stars from the European Tour have also confirmed their participation.

Comments
Topics mentioned in this article
Golf Mithun Perera Jeev Milkha Singh Cricket
Get the latest Cricket news, check out the India cricket schedule, Cricket live score . Like us on Facebook or follow us on Twitter for more sports updates. You can also download the NDTV Cricket app for Android or iOS.