Sharmila Nicollet recovers on back nine, shoots 74 in British Masters

Sharmila Nicollet made an excellent recovery on the back nine to bring home a modest two-over 74 on the opening day of the ISPS Handa British Masters here on Thursday. 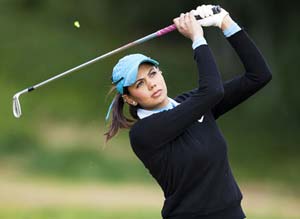 Sharmila Nicollet made an excellent recovery on the back nine to bring home a modest two-over 74 on the opening day of the ISPS Handa British Masters here on Thursday.

Sharmila teeing off from the tenth, bogeyed the 11th and double bogeyed the 13th to go three-over after just four holes. She got back a birdie on 15th but the double bogey on par-3 18th, which was her ninth hole, saw her end the first nine in four-over 40.

But she charged well in the second nine, the front half of the course, with birdies on first, sixth and seventh. Her lone bogey over the stretch came on third.

Sweden's Carin Koch and South African Lee-Anne Pace set the target at four under par 68 after the opening morning, in a tricky breeze but under sunny skies.

English-born Kiran Matharu, who is of the Indian origin, had a great start with a round of three-under 69, which put her in tied third position in the first half of the day.

Matharu had six birdies, five of them on the back nine of the course, and three bogeys in her 69.