Rory McIlroy, who has had a sensational start to the year, figures to be tested at Augusta National by resurgent Tiger Woods. 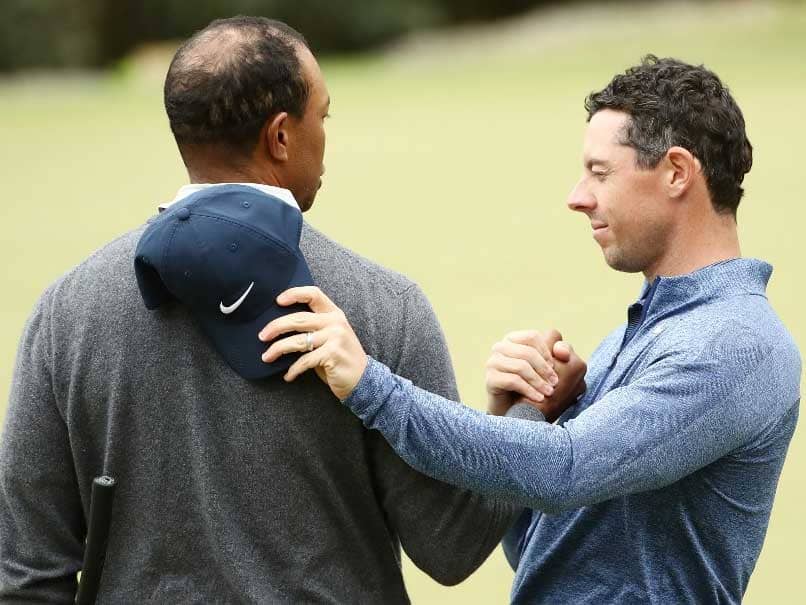 None of the 11 players ahead of Woods in the rankings have ever won the Masters, including Rory McIlroy.© AFP

Rory McIlroy's sensational start to the year, seven top-10 finishes including a Players Championship title, has him favored to win next week's Masters and complete a Career Grand Slam. But the four-time major winner from Northern Ireland figures to be tested at Augusta National by resurgent Tiger Woods, top-ranked Dustin Johnson and second-ranked Justin Rose among others. Third-ranked McIlroy, who turns 30 next month, has been a consistent contender all season and finally won at the Players after five top-six showings.

"If I concentrate on me, control what I can do, good golf and good attitude takes care of the rest," McIlroy said.

"And if I go to Augusta with a similar golf game and the attitude I've shown over the first few weeks of the year, I think I'll have a great chance."

Oddsmakers like his chances too. Las Vegas Westgate superbook makes him an 8-1 favorite with Johnson next at 10-1 and Woods and Rose at 12-1.

"I feel like I'm doing the little things right," McIlroy said. "And step by step they will add up to all that stuff that other people find important."

Topping that list would be a Masters Green Jacket to put McIlroy among those who have won all four majors, joining Woods, Jack Nicklaus, Ben Hogan, Gary Player and Gene Sarazen.

"I am motivated to make the most of what I have and to put my name among some of the greats of our game," McIlroy said.

McIlroy had an epic Masters near-miss in 2011 when he led by four strokes entering the final round only to fire an 80 and settle for a share of 15th.

Since it became the only major he lacked, McIlroy has had to change his mental Masters approach.

"I've had 10 years of learning at Augusta, some tough times. If one day I'm able to get that green jacket, all those experiences will have played a part in helping me do that."

McIlroy was ousted from last week's WGC Match Play by Woods, who enjoyed his best season result despite a quarter-final loss.

Woods, a 14-time major champion and four-time Masters champion, hasn't won a major since the 2008 US Open but is in form after spinal fusion surgery to end years of back pain, winning last year's Tour Championship.

The 43-year-old American sees Augusta National as a much greater challenge since he first won there in 1997 and not just because it's longer.

"It's way more challenging off the tees than it used to be," Woods said. "Some of the strategy has changed. Every green has been redone since I was first there."

None of the 11 players ahead of Woods in the rankings have ever won the Masters, including McIlroy and reigning US Open and PGA champion Brooks Koepka in fourth. Rose sees one of them ending the drought this week.

"If you look at the skill sets of the guys at the top of the world rankings, Augusta really should suit most of us," Rose said. "So I would say this year there's probably a very good probability that one of those guys will get it done."

Rose shared second to Jordan Spieth at the 2015 Masters and lost a playoff to Sergio Garcia in 2017.

"I've come close at the Masters. I've finished second twice. I've played golf capable of winning the Masters on both of those occasions. So I don't feel like I need to do a lot different to have chances to win the Masters," Rose said.

No.1 DJ back on form

Top-ranked Johnson, who won the WGC Mexico title in February, has four other top-six finishes this year and enters the Masters with confidence.

"The game's in pretty good form," Johnson said. "Definitely need to work on the short game a lot going into Augusta. I would love to win there."

Johnson was a huge favorite two years ago but injured his back on the eve of the tournament and withdrew.

"That was probably the best form I've ever been in," Johnson said. "Now it's definitely the closest I've felt to that stage of my career."

"I feel as confident as I've ever been in my putting," he said. "Augusta will be a good test and hopefully I can pass that test."

Comments
Topics mentioned in this article
Rory McIlroy Tiger Woods Golf
Get the latest updates on India vs Australia Series, check out the India vs Australia Schedule for 2020-21 and Ind vs Aus live score . Like us on Facebook or follow us on Twitter for more sports updates. You can also download the NDTV Cricket app for Android or iOS.