Rashid Khan Lies Second After First Round at Taiwan Masters

Rashid Khan carded four-under 68 to be second in the first round. Another Indian S. Chikkarangappa tied 12th. 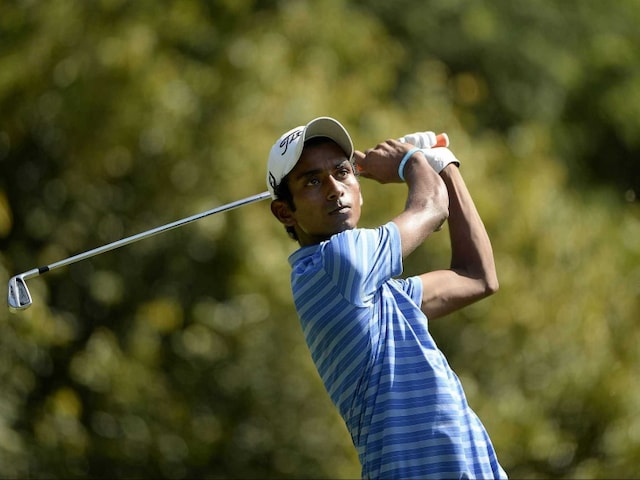 Rashid Khan produced a brilliant four-under 68 to lie tied second after the opening round of the $650,000 Mercuries Taiwan Masters at the Taiwan Golf and Country Club's Tamsui course here on Thursday. (Read more golf stories here)

The Indian golfer followed up a sedate start with a fine back nine that included two successive chip-ins for a birdie and an eagle to emerge as the best Indian.

S. Chikkarangappa (72) was tied 12th but the other Indians were headed to over-par scores.

Malaysia's Danny Chia took advantage of the favourable scoring conditions in the morning to seize the clubhouse lead with an opening five-under 67.

Himmat Rai (73) was tied 19th, while the experienced Arjun Atwal, Gaganjeet Bhullar and Rahil Gangjee -- all with 76 each -- were tied 57th and Chiragh Kumar (78) and Angad Cheema (81) were further down.

The conditions were excellent for scoring in the morning and then became tougher in the afternoon.

Rashid, winner of two Asian Tour titles, had eight straight pars before making a birdie on the 18th to turn in one-under after starting from the tenth tee. He added another shot on the par-three second after missing a hole-in-one by six inches. A bogey on third was his first error of the day when he missed an up-and-down for par.

Rashid quickly recovered from that on the fifth where he made up for a wayward tee shot with a chip-in birdie from 10 yards. An eagle on par-5 sixth and three pars in a row helped him to finish the day at 68.

"I played superb on my back nine, which is the front nine. I almost made a hole-in-one on the par-three second hole. I hit an eight-iron to about six-inches short of the cup. I missed an up-and-down and bogeyed the next hole but I managed to recover strongly on the fifth.

"I hit it left and the ball went OB but I was lucky as I managed to find the ball inside the trees. I had a really tough shot there but I hit it 10 yards short of the green and chip in for birdie," said Rashid.

He added, "It was the turning point for me. I was just trying to make par on the fifth but I managed to birdie. That gave me a lot of confidence heading into the remaining of the round. I had back-to-back chip-ins on fifth and sixth, where I eagled. I hit a driver and a three-wood to just short of the green and made a good chip-in for eagle."

On the conditions, he added, "It wasn't windy out there. The course is playing good. Conditions are good, especially after the typhoon earlier in the week. I will keep to the same things tomorrow. I know the course very well actually. I just had trouble reading the greens. I have been practicing a lot."

Chia, who claimed his only Asian Tour win in Chinese Taipei 13 years ago, fired two eagles and two birdies against a lone bogey to lead by one shot over Rashid.

Talented Thai Phachara Khongwatmai, youngest player in the field at 16 years old, returned with a 69 to sit in third place in what was his first attempt at the storied event, which is celebrating its 29th edition this week.

Arnond Vongvanij, also of Thailand, stays three shots off the pace in fourth following a 70, while Sri Lanka Mithun Perera lies one shot back in fifth alongside local duo of Yeh Wei-tze and Chan Yih-shin.

Starting from the 10th hole, Chia opened with three straight pars before producing his first eagle of the day on the par-five 13th where he sank a two-footer after hitting his hybrid-second shot from 223 metres.

He landed his second eagle of the day on the par-five seventh where his seven-iron approach shot from 160 metres landed six-feet from the hole.

Comments
Topics mentioned in this article
Rashid Khan Golf
Get the latest Cricket news, check out the India cricket schedule, Cricket live score . Like us on Facebook or follow us on Twitter for more sports updates. You can also download the NDTV Cricket app for Android or iOS.