Mithun Perera sticks with the old at the Maybank Malaysian Open

The slightly built Mithun, the first Sri Lankan to hold a full card on the Asian Tour, is a rare breed as he has resisted the lure of new equipment technology in the game. 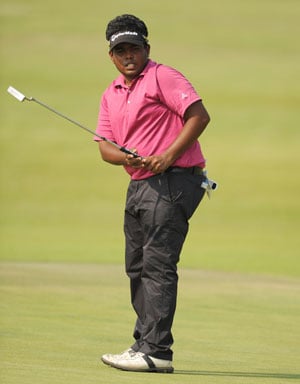 Sri Lanka's newcomer Mithun Perera is pinning his hopes at this week's US$2.75 million Maybank Malaysian Open on a collection of old golf clubs as he seeks to better his famous father's feats in the championship.

The slightly built Mithun, the first Sri Lankan to hold a full card on the Asian Tour, is a rare breed as he has resisted the lure of new equipment technology in the game, opting instead for fairway woods and a putter which is over 12 years old.

His father, Nandasena, is a famous name in Malaysia as he finished tied second behind Fijian Vijay Singh in the 1992 Malaysian Open. Nandasena, the 1990 Asian Games silver medallist behind Shigeki Maruyama of Japan, also won the Malaysian Amateur Open and the Sabah Masters.

"A lot of people know my father here and I'm so proud to be his son. Anywhere I go, at least somebody will know my father and they will help me because of that," said Mithun in a press conference on Tuesday.

Mithun is one of the shortest hitters on the Asian Tour, averaging 260 yards off the tee but he is not interested to upgrade his clubs, even with manufacturers offering him the latest equipment.

"My driver is about two years old but my fairway woods are about 12 years old as with my putter," he said.

"I'm a feel player and I don't believe in changing equipment. I've got a natural golf swing. I don't try to hit hard. I'm hitting it 260 yards but I don't try to hit it at 261. I'm not following the new technology. My woods are really old," he laughed.

"I think everybody has a chance to win a tournament. All you need is one good week. If you can go really low then you have a chance to win. I feel that I can do that as well.Â  My father Nandasena is a legend and he is my coach too. The Sri Lankan people cheer for me and give me a lot of well wishes. I'm so happy to be the first Sri Lankan to have a full Asian Tour card," he said.

He came close to becoming his country's first winner on the Asian Tour at the season-opening Zaykabar Myanmar Open last month, shooting a brilliant final round 65 to finish one shot behind winner Chawalit Plaphol of Thailand, who birdied the last two holes for the victory.

Mithun is well over the near miss and is prepared to play in every event on the Asian Tour this year to achieve his dream of winning on the region's premier Tour which is celebrating its milestone 10th season in 2013 as a players' organisation.

"Every tournament is important for me. I was the clubhouse leader in Myanmar and thought I had a chance to play in a play-off but Chawalit played so well to win," he said.

"I want to win at least one Asian Tour event this year. I need a bit more luck. It will come very soon. I need to keep playing and focus on my game."

He trains with his father regularly when he is back in Colombo but it is the pearls of wisdom that Mithun enjoys the most. "He's given me a lot of advice. He couldn't get on the Asian Tour because he had Arthritis. I'm here because of his advice," he said.

What's been the best advice from his old man? "Try to collect more birdies!" laughed Mithun.

Comments
Topics mentioned in this article
Gaganjeet Bhullar Darren Clarke Mithun Perera Shiv Kapur Thaworn Wiratchant Golf
Get the latest Cricket news, check out the India cricket schedule, Cricket live score . Like us on Facebook or follow us on Twitter for more sports updates. You can also download the NDTV Cricket app for Android or iOS.