Having tapped in for birdie, Mickelson watched on as Grace's valiant attempt to follow him in from 30 feet drifted past the hole, thereby handing the American the win and, with it, a cheque for 579,079 euro. 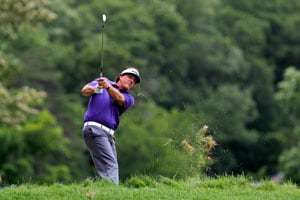 Phil Mickelson could not have asked for a better warm-up for his challenge at the Open Championships as he claimed his first victory in a regular European Tour event at the Aberdeen Asset Management Scottish Open here.

Mickelson won the title, thanks to a typically magical chip on the first extra hole of a play-off against Branden Grace.

Mickelson will attempt to lift the Claret Jug for the first time, when he tees up at Muirfield next week.

Mickelson, famed for his short game prowess, and a four-time Major winner, showed exactly why after making light of a bare lie to stop his wedge shot on the par-five 18th hole within a matter of inches of the cup.

Having tapped in for birdie, Mickelson watched on as Grace's valiant attempt to follow him in from 30 feet drifted past the hole, thereby handing the American the win and, with it, a cheque for 579,079 euro.

It was a dramatic finish. Grace, the South African, set the clubhouse target on 17-under par after closing with a round of 69 at Castle Stuart Golf Links, in Inverness.

Mickelson was on 18-under par playing the last but, after rushing his five foot birdie attempt past the hole, he also missed his par putt coming back to sign for a round of 69 and set up a play-off.

Grace was unable to take advantage of his unexpected reprieve. He conceded that he had always expected Mickelson to produce something special in extra time.

"It's very special for me to have some success over here, in the Home of Golf. It's been the biggest challenges of my career, adapting to links style golf, and this was a great challenge for me this final round in some difficult conditions on firm ground. I played some good golf to come out on top, and this is really fulfilling and special," Mickelson said after the win.

"I don't think there's a better way to get ready for The Open Championship than playing well the week before and getting into contention, and coming out on top just gives me more confidence," Mickelson said.

To his credit, Grace refused to be too downhearted after coming mightily close to adding to his haul of four European Tour titles.

"I hit what I thought was a great third shot in the play-off, but it just came up short and I left myself with a bit much to do. You just imagine that he's going to do something special with the lob wedge in his hand, and that's what happened," Grace said.

"Obviously you're going to be disappointed missing in a play-off, but it's just one of those things. I played great and the game is there, so it's nice getting this confident heading into next week."

For much of the day, it looked like neither man would win, with unheralded Dane JB Hansen and Sweden's Henrik Stenson taking it in turns to lead the tournament.

Remarkably, Hansen recovered from a quadruple bogey nine at the second hole with six birdies - five of them in succession from the third - to reach the turn in 34.

After carding further birdies at the 10th and 14th holes, he appeared on course to claim his maiden European Tour title in spectacular fashion, only to drop three shots in his last four holes to fall back to 15-under par.

That left the door ajar for Stenson who, after moving to 18-under par with back-to-back birdies from the 10th hole, had seemed set to capture his first piece of silverware after winning the SA Open Championship at the end of last year. But after bogeying the 13th hole and dropping further shots at the 16th and 17th, he had to be content with a share of third place alongside Hansen.

Comments
Topics mentioned in this article
S.S.P. Chowrasia Phil Mickelson Golf
Get the latest updates on ICC Women's Cricket World Cup 2022 and IPL 2022, check out the Schedule , Live Score and IPL Points Table. Like us on Facebook or follow us on Twitter for more sports updates. You can also download the NDTV Cricket app for Android or iOS.