South African Louis Oosthuizen posted a second straight 66 on Saturday to take a two-shot lead over Hunter Mahan after three rounds of the US PGA Tour's $6 million Houston Open. 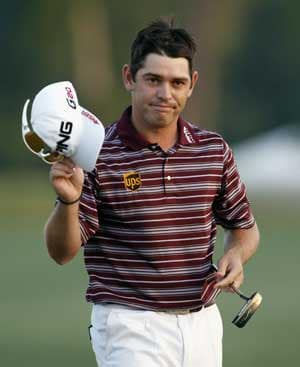 South African Louis Oosthuizen posted a second straight 66 on Saturday to take a two-shot lead over Hunter Mahan after three rounds of the US PGA Tour's $6 million Houston Open.

Oosthuizen bounced back after two early bogeys, stringing together four straight birdies on the back nine as he took a 17-under total of 199 into the final round.

"It's a great leaderboard behind me," Oosthuizen said. "It's going to be tough, but I feel like I'm ready for it."

Mahan carded a 65 for 201 as players put in another long day on the Redstone course to get the tournament, delayed by thunderstorms on Thursday, back on schedule.

England's Brian Davis shot a 69 and Carl Pettersson of Sweden a 67 to share third on 202.

James Driscoll was alone on 204 after a 71, while defending champion Phil Mickelson posted a 70 to lead a group on 205 that also included Keegan Bradley (69) and Ryan Palmer (66).

Three-time major champion Ernie Els, who must win to qualify for the Masters next week, was in a group on eight-under.

The South African, who hasn't missed the Masters since 1993, didn't think he'd given himself much of a chance.

Oosthuizen completed a 66 that put him on 11-under, one shot behind second-round leader Jeff Maggert.

Oosthuizen's third round got off to a rocky start with bogeys at the first and second.

The 2010 British Open champion drained an 11-foot birdie putt at the sixth, and added birdies at eight and nine to make the turn at 12-under.

"After that, I felt really comfortable," Oosthuizen said. "I made really good swings after that."

Mahan, who has three top-10 finishes in five previous starts here since 2007, moved up the leaderboard with four birdies in the space of six holes.

A whopping 90 players made the 36-hole cut at two-under par or better when the second round wrapped up Saturday morning.

Another cut was made after the third round, leaving 70 players in the field for the final round.

Comments
Topics mentioned in this article
Brian Davis Phil Mickelson John Isner Bill Haas Rory McIlroy Arjun Atwal Louis Oosthuizen Golf
Get the latest updates on T20 World Cup, check out the T20 World Cup Schedule and Live Score . Like us on Facebook or follow us on Twitter for more sports updates. You can also download the NDTV Cricket app for Android or iOS.