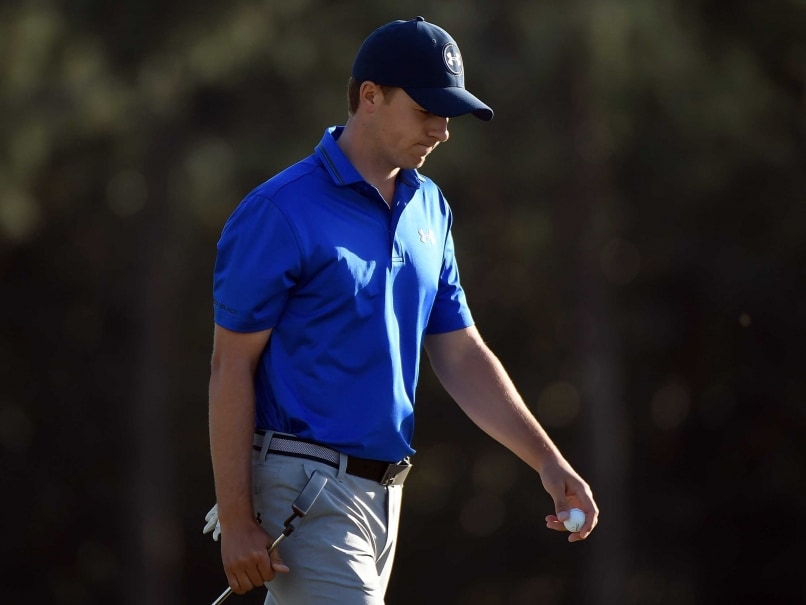 Jordan Spieth lost momentum but managed to hold on to a one-stroke lead over Rory McIlroy in the Augusta Masters.© AFP

The final pairing for a weekend at the Masters is what everyone wanted - Jordan Spieth and Rory McIlroy, winners at four of the last six majors. (Latest Golf News)

Just nobody expected this kind of an Augusta National.

In the toughest scoring conditions at the Masters in nearly a decade, Spieth had a five-shot lead that nearly disappeared before he saved par from a bunker with a 15-foot putt on the final hole for a 2-over 74 and a one-shot lead over McIlroy.

"It was very tough to stay cool," Spieth said. "You could say, 'Looked like you got emotional out there.' I mean, you guys try it. That was a hard golf course."

McIlroy, who trailed by as much as eight shots at one point, put the career Grand Slam in clear view by making birdie on both par 5s on the back nine and picking up a bonus birdie with a 40-foot putt on the par-3 16th for a 71.

That matched the lowest round of the day, the first time since 2007 that no one broke 70 at the Masters.

"You just have to look at the scores and you can see how tough it is today," McIlroy said.

Spieth set a Masters record with his sixth straight round in the lead, and it took a few minutes for him to appreciate that after trying to survive gusts that reached 30 mph and a golf course so crusty that even 2-foot putts made him nervous.

"I'm still in the lead. I couldn't ask for much better than leading," Spieth said.

Spieth and McIlroy will tee off in the last group Saturday - one going for his second green jacket, the other needing one to complete the ultimate collection of golf prizes.

Given the conditions - more of the same is expected Saturday - this felt more like everyone against Augusta National than Spieth vs. McIlroy.

"It would add a lot of excitement and buzz and atmosphere to the tournament, obviously," McIlroy said. "If you start to think about anyone else ... I've only got the mental capacity to focus on me right now, especially how tough it is out there."

Spieth said it would be exciting to play with McIlroy and left it at that.

There was too much golf to play, too many players still in the mix.

"There's the potential tomorrow for someone to shoot a few under and move up into the lead from outside the top 25," Spieth said. "There's a potential for that with what I saw on the last six holes today, the way the course was playing. So I don't think either one of us is focused on each other. I think we're focused on the golf course."

Danny Lee bogeyed his last two holes for a 72 and was two shots behind, along with Scott Piercy (72). The only other players who remained under par were Hideki Matsuyama (72), Brandt Snedeker (72) and Soren Kjeldsen (74).

Dustin Johnson birdied all the par 5s for a 71 and was in the group at even par that included U.S. Amateur champion Bryson DeChambeau, who felt the sting of Augusta on the final hole. DeChambeau was playing the best round of the day at 3 under and just one shot out of the lead. But he hooked his tee shot into the trees and had to return to the tee, hooked the next one and made triple bogey for a 72.

Still in the mix was Jason Day, the No. 1 player who sputtered along to a 73 but was only five shots behind.

"It almost feels like a U.S. Open where you need to survive," Day said. "And I'm trying my best to survive right now."

Spieth finished a round over par at Augusta for the first time in his three Masters appearances. Coming off his wire-to-wire victory last year, that par save on the 18th allowed him to set a record for consecutive rounds in the lead. Arnold Palmer was atop the leaderboard for six straight rounds in 1960 and the opening two rounds in 1961, though he shared the lead in those last two rounds.

Despite the lead, it was hard to get past Spieth's mistakes - a four-putt double bogey on No. 5, a three-putt bogey on No. 16, and another bogey on the 17th hole.

"I was at 8 under and you finish at 4. That's kind of tough," Spieth said. "I felt like I played better than 4 over from the fourth hole on."

Spieth's par on the last hole not only kept him in the lead, it sent Phil Mickelson home for the weekend because of the 10-shot rule. Mickelson shot a career-high 79 and finished at 7-over to miss the cut.

Tom Watson missed the cut by two shots in his final Masters appearance, walking up the 18th fairway to a standing ovation and warm applause. He parred his last four holes for a 78 and said later, "I'm glad I don't have to play that 18th hole anymore."

Spieth, McIlroy and everyone else have two more days to endure to see who claims the green jacket.

Comments
Topics mentioned in this article
Golf Jordan Spieth Rory McIlroy
Get the latest updates on Olympics 2020, Olympics 2020 Medal Tally, Live Cricket Score . Like us on Facebook or follow us on Twitter for more sports updates. You can also download the NDTV Cricket app for Android or iOS.