Edfors was the star of the day as he went through the 14-hole round with six birdies and had no bogeys blotting it. 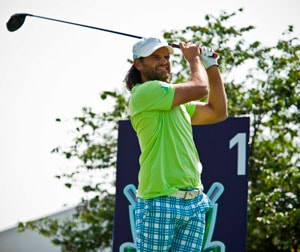 Johan Edfors carded a fine six-under 49 for the par-55 14-hole round on the opening day to take a one-shot lead over Kenwood Nippon Delhi Darts teammate Rahil Gangjee in the Pearls Golf Premier League in Pune on Friday.

The result was that Kenwood Nippon Delhi Darts was also in lead in team championships with Shubhkamna UP Eagles in second spot. Maharashtra 59ers were lying third at eight-under while Tamil Nadu Pullees and Witalsee Punjab Lancers are lying tied fourth,

Edfors was the star of the day as he went through the 14-hole round with six birdies and had no bogeys blotting it. "It was great fun. I had a solid round. It is nice to get into the second round with a good cushion," said Edfors, who is a brand Ambassador for Black Mountain Golf Course in Thailand, which is quite similar to Aamby Valley.

"I have played in the same group as Rahil twice before on Asian Tour and we were recalling that as we played along. Rahil did well initially and then I had a good back stretch (of seven holes)," he added.

Gangjee, who played last two years on Web.com Tour and will now play on Asian Tour, added, "We jelled well and had great fun. Since we are also leading it is even better. Hopefully we can continue the good work and it will give me a great start for the season."

Gangjee said, "I had five birdies and could have had one or two more. But I will take a five-under in a 14-hole round anyday."

Daniel Chopra, who shot four-under said, "I was trying to break 50 (that is under) and I came close. I am happy with the way it went but most importantly it was fun playing along side Shamim Khan, Rashid and David Howell."

Scott Hend who shot four-under for Maharashtra 59ers, said "I struggled a bit initially with a lost ball and then a three-putt. Then my teammate Ashok, who has had some experience of this course helped me read the greens, which I was finding difficult to begin with. Then I ended fine to come back with four-under."
Anirban Lahiri of Shubhkamna Eagles had a fine four-under, but he felt that he could have been at least three to four better. "I had a lot of lip outs and misses. I felt I could have gone really low."

Similar was the reaction from Simon Dyson of Colombo 6's. "I missed so many shots out there. I hope I can hole a few more putts tomorrow."
Uttarakhand Lions top man Darren Clarke and Maharashtra 59ers star Angel Cabrera shot three-under each as did Witalsee Punjab Lancers' Gaganjeet Bhullar.

Comments
Topics mentioned in this article
Golf Johan Edfors Rahil Gangjee
Get the latest updates on India vs Australia Series, check out the India vs Australia Schedule for 2020-21 and Ind vs Aus live score . Like us on Facebook or follow us on Twitter for more sports updates. You can also download the NDTV Cricket app for Android or iOS.