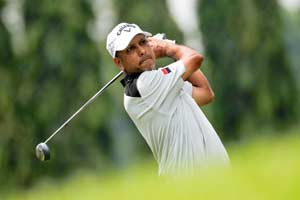 The 40-year-old Singh also booked his place in the British Open next week by reaching the play-off against the overnight leader.

Singh, who had been five shots off the lead going into the final round, hit a five-under 67 to finish on 17 under par for the tournament.

Molinari held his nerve to birdie the final hole for a par 72 to send the tournament into the play-off.

But back on the 18th, Molinari left his birdie putt well short while Singh confidently held his testing 15-footer to add the Scottish Open to his wins at the 2006 China Open and Volvo Masters as well as the 2008 Austria Open.

Singh's best performance this season had been a seventh place finish at the Stockholm Masters in June.

"I think the last tournament in Ireland and here have extended my love for this type of golf. I have always loved links golf. You need to use imagination and intelligence," said Singh, as he waited for the play-off to start.

"Coming from India I didn't know a lot about it but I just love it."

It is the second week in succession Molinari has finished runner-up after he was second in last week's French Open.

Scotland's Marc Warren had been leading by two strokes with three holes to play but three-putted the 16th hole for a double bogey and then had to take a penalty drop on his way to a bogey at 17.

Warren, looking to become only the second Scotland-born champion, then parred the last in a round of 71 to share third place on 16-under par with Sweden's Alex Noren (70).

Despite Donald's finish he heads to the British Open still as the game's leading ranked player.

Comments
Topics mentioned in this article
Francesco Molinari Golf Phil Mickelson
Get the latest updates on India vs Australia Series, check out the India vs Australia Schedule for 2020-21 and Ind vs Aus live score . Like us on Facebook or follow us on Twitter for more sports updates. You can also download the NDTV Cricket app for Android or iOS.