The Panasonic Open India begins at the Delhi Golf Course on Thursday with top Indian golfers competing for the crown. 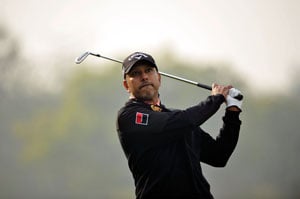 Jeev Milkha Singh, returning to the Delhi Golf Course after five years, and the fast-rising Gaganjeet Bhullar will be the cynosure of all eyes when they tee up along with some top Indian and Asian golfers at the USD 300,000 Panasonic Open India starting on Thursday.

"I am glad to be back after five years. I finished fourth when I played here the last time and aiming to win this week," Jeev said in the pre-tournament press conference at the Delhi Golf Club.

"The competition is very good and I am looking forward to a good week. I have played well in the Panasonic Open in Japan and hoping to do well here also. I have never won at the Delhi Golf Club and I want to get this monkey off my back," said the seasoned pro.

Also competing at the third edition of the Asian Tour event would be Bhullar, who made a fine start to the season by finishing second at the Avantha Masters on the European tour.

"Being placed inside the top-100 (in the world rankings) has given me a lot of confidence. The way I am striking the ball, a victory is not too far away," said Bhullar.

"I had a great start to the season. Last season was also good for me and it has given me a lot of confidence," he added.

Joining them in the field would be the inaugural edition's champion Anirban Lahiri and defending champion Digvijay Singh.

"It's always nice to come back to a course where you have done well. I was quite fortunate to win here. I am looking forward to a solid week ahead," said Lahiri.

The big international name in the field is Oliver Wilson, the Englishman who finished second nine times on the European Tour and has represented Europe at the 2008 Ryder Cup.

The top-three players at the Panasonic Open India will be extended invitations to the Asia-Pacific Panasonic Open, sanctioned by the Asian Tour and Japan Golf Tour Organisation, in Osaka, Japan in September.

"The course was firm but rains have made it softer. I feel the scoring is going to be low because the greens are softer," said Jeev.

Comments
Topics mentioned in this article
Sujjan Singh Oliver Wilson Anirban Lahiri C Muniyappa Golf
Get the latest updates on SA vs IND 2021-22, check out the Schedule and Live Score . Like us on Facebook or follow us on Twitter for more sports updates. You can also download the NDTV Cricket app for Android or iOS.