The Asian Tour star will enjoy the honour of becoming the first Bangladeshi player to tee up at the World Cup of Golf which starts on Thursday and he intends to enjoy the walk at Royal Melbourne Golf Club with a strong showing. 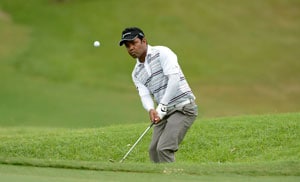 Siddikur Rahman will remember his 29th birthday for a very long time.

The Asian Tour star will enjoy the honour of becoming the first Bangladeshi player to tee up at the World Cup of Golf which starts on Thursday and he intends to enjoy the walk at Royal Melbourne Golf Club with a strong showing.

"It's nice to be in my first World Cup on my 29th birthday today. I'm really excited and I'm glad to play in this tournament. I'm proud with what I have achieved. I have received a lot of messages from my fans and friends on Facebook and emails and they are encouraging me to play well and it's good for me and good for golf in Bangladesh," said Siddikur.

Two weeks ago, he won the Hero Indian Open for his second Asian Tour title which will ensure he finishes in the top-10 of the Order of Merit for the third time in the last four years, an impressive feat for a player who hails from a nation with very little golfing culture.

Siddikur hopes his historic ride at the World Cup of Golf, which is offering US$7 million in the individual category and US$1 million in the team category for nations which have two players in the event, will accelerate the growth of golf in his country.

"In the past, some people may not follow golf but now, more and more people are following golf especially when I have managed to play well. They are now cheering me on which is quite inspiring," said Siddikur, who grew up as a ball boy at a local club in Dhaka and played the game with a makeshift seven iron head stuck on a metal rod.

"Honestly, I never ever thought about being a good professional golfer on the Asian Tour or play in the World Cup or in the Olympics. It wasn't even in our dreams. But now, the dream has come true and it's the first time I'm participating in the World Cup and I'm expecting I can qualify for the Olympics as well (as the qualifying system is similar. One by one, the dream is coming true and it's happening nicely. It feels really good.

"Since I'm doing well now on the Asian Tour, golf is now becoming more popular in Bangladesh. Many young potential players are coming through. The government is also thinking about golf and taking more initiatives to support the game. Nowadays, I see young potentials coming up and I do hope they will become better than me," added Siddikur.

With his confidence still high following his Indian Open victory a fortnight ago, Siddikur, one of the straightest hitters on Tour, knows he must master the tricky greens at Royal Melbourne to mount a title charge.

"This kind of greens, it's my first experience playing on them. I played really well (at the Australian Masters last week) but it took me a long time to learn about them. I absolutely had no idea about these greens but I've practiced a lot on the greens the past few days and I think I'm doing good now. It's the first time I'm playing on such fast and tricky greens in my life," he said.

"My confidence is still there. Even though I missed the cut last week, everything is still good, I just need to putt better. I missed some putts last week but I guess it takes time to learn. I hope if I can I putt well, I can be amongst the leaders this weekend with some good scores. The key will be to manage my game well on the greens."

Comments
Topics mentioned in this article
Golf Siddikur Rahman
Get the latest updates on IPL 2020, check out the IPL Schedule for 2020 and Indian Premier League (IPL) Cricket live score . Like us on Facebook or follow us on Twitter for more sports updates. You can also download the NDTV Cricket app for Android or iOS.