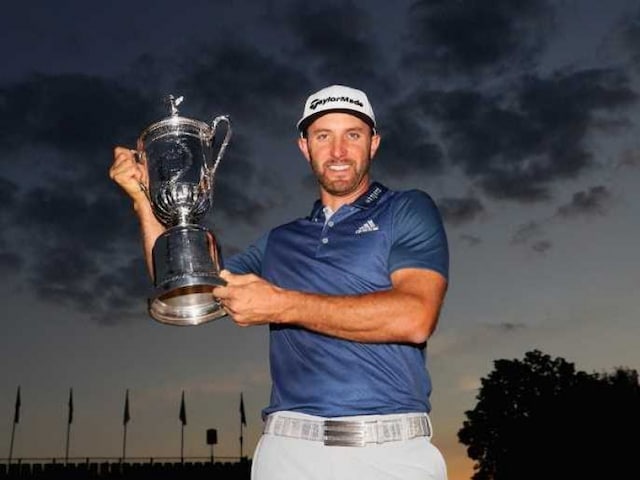 Dustin Johnson poses with the winner's trophy after winning the 2016 US Open at Oakmont Country Club on Sunday.© AFP

Dustin Johnson shook off the spectre of a potential penalty controversy, leaving no room for doubt in his first major victory at the 2016 US Open at Oakmont.

With just one stroke separating Johnson from Shane Lowry atop the leaderboard, the US Golf Association informed Johnson he could be assessed a penalty after the round for an infraction on the fifth green.

Johnson's ball moved slightly as he prepared to putt for par. He spoke with a rules official and it was determined he did not cause the ball to move so no penalty was assessed at the time.

But with the title chase at its peak, Johnson and his nearest rivals on the course were informed that USGA officials planned to review video of the incident again after his round.

It was yet another major complication for Johnson, the world number six who has endured a string of near misses in golf's biggest events, including a three-putt at the 72nd hole of last year's US Open that handed the title to Jordan Spieth.

But he kept his focus, and as Lowry faded with three late bogeys the entire matter became less pressing.

Johnson finished with a flourish, calmly draining a nine-foot par putt at 17 and a short birdie putt at the final hole.

When a penalty was indeed assessed, he still owned a winning margin of three strokes.

The USGA's handling of the matter caused a stir on social media, with pro golfers weighing in.

"This is ridiculous... No penalty whatsoever for DJ. Let the guy play without this crap in his head. Amateur hour from @USGA," tweeted Rory McIlroy, who missed the cut at Oakmont.

Spieth, who finished his fourth round earlier, added: "Lemme get this straight.. DJ doesn't address it. It's ruled that he didn't cause it to move. Now you tell him he may have? Now? This a joke?"

PGA Tour pro Brandt Snedeker tweeted: "Hey @USGA, it's impossible for DJ to cause the ball to move backwards!!!!!!! #commonsense."

World number one Jason Day, who finished tied for eighth six shots behind Johnson, said he couldn't fault officials for informing Johnson that the penalty could be assessed.

"I'd probably rather know. I like to know where I'm at on the leaderboard."

Comments
Topics mentioned in this article
Dustin Johnson Shane Lowry Golf
Get the latest Cricket news, check out the India cricket schedule, Cricket live score . Like us on Facebook or follow us on Twitter for more sports updates. You can also download the NDTV Cricket app for Android or iOS.