The Pro-Am will be held on Thursday and the main event to played over three rounds of 14 holes each under floodlights will begin on Friday. 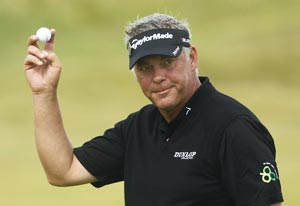 The stars have descended onto the Aamby Valley City for the inaugural Pearls Golf Premier League. From Major winners Darren Clarke to Rich Beem to Angel Cabrera and Asia No. 1 Thaworn Wiratchant and Indian PGTI No. 1 Shamim Khan, they are all there and looking forward to being part of what could be landmark moment for Indian golf.

"It is wonderful to be part of something new," said the 2011 British Open champion, Darren Clarke and then gushed about this great course. "It is absolutely superb. Such lovely views and the weather is great."

What about his experience in India? "I have never been to this part of the country. My previous experience was Delhi and now this. I am loving it. When I was first asked about the League I wondered if this could be pulled off. And now here I am. And so are so many fine players from all over." Clarke will play for Uttarakhand Lions.

Thaworn Wiratchant, a two-time Indian Open winner, including 2012, when he also emerged as the oldest Asian Tour No.1 and the most prolific winner in Asian Tour's 10-year history, said, "When this (Aamby Valley Golf Course) last hosted an Asian Tour event (in 2006) I could not make it. So I was very keen. I have heard a lot about this course from my Indian friends. I have liked the course."

What about the League itself? "This is totally new. It brings together players from Asia, Europe and even US to play alongside top stars from India. A wonderful idea to unite all and promote the game. That it will be live on TV is a big boost." Thaworn will turn out for Witalsee Punjab Lancers.

Thaworn had a great practice round with fellow Thai professionals, J Pariya and Chapchai Nirat, who holds the world record of 32-under, set in India in 2009.
Indians Ajeetesh Sandhu and Rahil Gangjee, who will play for Delhi Darts are also looking forward to the event. Ajeetesh said, "IT will be great to play alongside some of the leading players in world. They are Major winners, Asian and European Tour winners. Playing and interacting with them will help us youngsters."

When asked about Aamby Valley, Sandhu added, "I love this course. It is so scenic and I have played here on PGTI events."

Gangjee was happy to back with his friends on Indian tour after two years on Web.com Tour. "Golf in India has grown by leaps and bounds and this league is an evidence of it. I am looking forward to this event. As for the course, I love it."

Ashok Kumar, who was leading after three rounds at the Aamby Valley Masters back in 2006, said, "I have mixed memories but I love this course. And this new league will help us play with top stars from all over."

The Pro-Am will be held on Thursday and the main event to played over three rounds of 14 holes each under floodlights will begin on Friday.

Comments
Topics mentioned in this article
Golf Darren Clarke Gaganjeet Bhullar Mithun Perera Shiv Kapur Shamim Khan Thaworn Wiratchant
Get the latest Cricket news, check out the India cricket schedule, Cricket live score . Like us on Facebook or follow us on Twitter for more sports updates. You can also download the NDTV Cricket app for Android or iOS.