Ben Crane's 10-under total of 270 gave him a one-stroke victory over fellow American Troy Merritt, who closed with a one-over 71 at TPC Southwind. 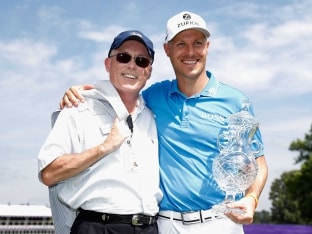 Crane's 10-under total of 270 gave him a one-stroke victory over fellow American Troy Merritt, who closed with a one-over 71 at TPC Southwind.

Ben Crane posted a three-over 73 in the final round of the St. Jude Classic but emerged from a marathon Sunday with his first US PGA Tour title since 2011.

Crane's 10-under total of 270 gave him a one-stroke victory over fellow American Troy Merritt, who closed with a one-over 71 at TPC Southwind.

Crane had completed a one-under 69 earlier Sunday to take a three-stroke lead into the final round, after weather delays on Thursday, Friday and Saturday had left the $5.8 million tournament behind schedule.

Former US Open champion Webb Simpson carded a fourth-round 66 to join Matt Every and Carl Pettersson on 272. Every posted a 70 and Sweden's Pettersson a 69.

England's Ian Poulter posted the low score of the final round with a six-under 64 that included seven birdies to join a group sharing sixth on 273 alongside James Hahn, Andrew Svoboda, Brian harman and Billy Horschel.

Crane, who notched the fifth PGA title of his career, played 30 holes on Sunday, wrapping up the last 12 holes of his third round.

He'd led since the first round, but the long day appeared to be taking a toll as bogeys at the sixth and ninth opened the door for his pursuers.