On an Oak Hill layout softened by pre-dawn showers and a 70-minute afternoon rain delay, Scott and Furyk flirted with the course record of 64 shared by Ben Hogan and Curtis Strange before finishing on five-under par 65. 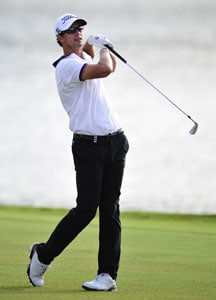 On an Oak Hill layout softened by pre-dawn showers and a 70-minute afternoon rain delay, Scott and Furyk flirted with the course record of 64 shared by Ben Hogan and Curtis Strange before finishing on five-under par 65.

"Probably the best run I've ever had," Scott said. "I just hit really nice shots and didn't leave myself too much work... It was a dream start."

Woods, a 14-time major champion seeking his first major title since the 2008 US Open stumbled to a 71, as did world number two Phil Mickelson.

Scott won his first major title last April at Augusta National, becoming the first Aussie winner of the green jacket, and the 33-year-old from Adelaide is firmly in the frame to land another major after his epic birdie binge.

Scott started his birdie run at the par-5 fourth and birdied the next four in a row before a par at the ninth gave him a 30 for the front nine and a share of the lead.

"I got on a bit of a roll and hit a few shots clean," Scott said. "You've got to take advantage of that if it happens because it doesn't happen very often at majors."

"I managed to right the ship," Scott said. "I hung in there and that was a great par at the last."

Just 13 months after squandering a four-stroke lead with bogeys on the final four holes to hand a British Open title to Ernie Els, Scott was showing the form that saw him come third in last month's British Open at Muirfield.

Furyk, who started on the back nine, took a bogey at the ninth to miss out on the record, but still produced a 65 for his lowest first-round score in 73 career majors.

Furyk, the 2003 US Open champion, has not won since the 2010 Tour Championship but the 43-year-old American fired six birdies at Oak Hill to launch his quest for a 17th career title.

"I had a good ball-striking day," Furyk said. "I felt like the course would set up well for me. It's set up like a US Open course.

"I missed one drive in the heavy stuff but overall a good day. It was good to get my feet under me. I got relaxed and settled into my game. I got on a roll and got a lot of confidence out there."

Woods began on the back nine and birdied the par-5 13th and sank an eight-foot birdie putt at the par-3 15th and saved pars at 17 and 18 after missing the green.

But Woods missed a four-footer for birdie at the second and took a bogey at the par-5 fourth. At the ninth, he went in the rough, then found and bunker and lipped out a 12-foot bogey putt.

Defending champion Rory McIlroy opened with a 69 to share 22nd place. The Northern Ireland star birdied three of the first four holes but began the back nine with back-to-back bogeys sandwiched between birdies at the ninth and 12th, then took a bogey at 17.

"Off to a fast start," McIlroy said. "Felt like I could shoot a low one. That last four-hole stretch is tough. I didn't play it like I wanted but all things considered it wasn't a bad round."

"I think 68 is a good start," Rose said. "The course did offer the opportunity to get it going low as Adam Scott proved. All in all, really happy."

Comments
Topics mentioned in this article
Golf Phil Mickelson Jim Furyk Tiger Woods Adam Scott Rory McIlroy
Get the latest Cricket news, check out the India cricket schedule, Cricket live score . Like us on Facebook or follow us on Twitter for more sports updates. You can also download the NDTV Cricket app for Android or iOS.