Nine months after making bogeys on the last four holes to squander a British Open lead at Royal Lytham and two years after sharing second at the Masters, the 32-year-old from Adelaide won his first major title in impressive fashion. 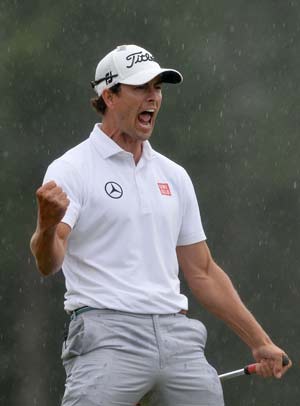 Nine months after making bogeys on the last four holes to squander a British Open lead at Royal Lytham and two years after sharing second at the Masters, the 32-year-old from Adelaide won his first major title in impressive fashion. (See the celebrations in pics, here)

"I don't know how that happened," Scott said. "It seems a long, long way from a couple years ago, or last July when I was trying to win a major."

Scott and Cabrera both birdied the 18th hole to finish deadlocked after 72 holes on nine-under par 279. Each parred the hole again to open the playoff and both had birdie putts at the second playoff hole, the par-4 10th. (Also read: Australians celebrate historic win)

Cabrera just missed his 12-footer and Scott followed with his winning putt, thrusting his arms into the air with joy after the ball curled into the cup to signal the end of a journey from Down Under to the top of the golf world.

"It's amazing that it's my destiny to be the first Aussie to win," Scott said. "Just incredible."

It was Scott's second celebration after an emotional 25-foot birdie at 18 in regulation that Cabrera matched with a stunning approach to four feet and a birdie putt of his own.

"There was a split second I thought I had won," Scott admitted. "You never count your chickens. It was time to step up and see how much I wanted it."

Cabrera, the 2007 US Open and 2009 Masters champion, shared a hug with Scott after the final putt.

"That's how golf is," Cabrera said. "I came back. I had my chance to win it. Adam is truly a good winner. He's a great person and a great player and I'm happy for him."

Cabrera, a grandfather ranked 269th in the world, would have been the second-oldest Masters champion at 43, trailing only Jack Nicklaus winning the 1986 Masters at age 46.

Australian Jason Day was third on 281, two strokes ahead of world number one Tiger Woods and Aussie Marc Leishman with Denmark's Thorbjorn Olesen and American Brandt Snedeker sharing sixth on 284.

Woods, a 14-time major champion who has never won a major when he did not at least share the 54-hole lead, has not won a major title since the 2008 US Open and not won the Masters since taking his fourth green jacket in 2005.

The Masters was the only major that no Aussie had won, the Augusta National jinx -- now shattered forever -- including three heartbreaking defeats for two-time British Open champion Greg Norman.

Norman took a bogey at the 18th in the 1986 Masters to hand Nicklaus the victory and the next year Norman lost a Masters playoff when Augusta native Larry Mize holed a miraculous chip shot.

In 1996, Norman suffered the greatest last-round collapse in major golf history, leading by six over Nick Faldo only to lose by five to the Englishman.

"He inspired a nation of golfers," Scott said. "Part of this definitely belongs to him."

Scott, who uses an anchored putting stroke, fired a 69 and Cabrera a 70 in the last round.

Day could only watch Scott and Cabrera make their stunning shots at the 18th hole and ponder what might have been.

A day after closing with back-to-back bogeys, Day opened with a birdie and followed with an eagle at the par-5 second, but stumbled back with bogeys at the par-3 sixth and par-4 ninth.

Day ripped off a run of three birdies in a row starting at the par-5 13th to put himself into the lead, but bogeys at the 16th and 17th left him third after a closing 70.

"It was really tough," Day said. "Pressure got to me a little bit."

Woods, fell eight strokes off the lead before making a late charge that came up short, firing a 70 to share fourth.

"I played well," Woods said. "Unfortunately I just didn't make enough putts. I certainly had an opportunity. I thought if I shot 65 I could win it outright."

Bogeys at the fifth and seventh dropped Woods back, but he birdied the ninth and 10th, then the par-5 13th and 15th to reach five under, unable to gain enough ground on the leaders on the wet, undulating greens of Augusta National.

"I had a hard time getting accustomed to the speed," Woods said. "It was so much slower with the rain. I left every putt short."

Guan Tianlang, the 14-year-old Chinese schoolboy who is the youngest player in Masters history, fired a 75 to finish on 12-over 300 to claim the Silver Cup as low amateur.

Comments
Topics mentioned in this article
Angel Cabrera Brandt Snedeker Adam Scott Carl Pettersson Phil Mickelson Anirban Lahiri Golf
Get the latest Cricket news, check out the India cricket schedule, Cricket live score . Like us on Facebook or follow us on Twitter for more sports updates. You can also download the NDTV Cricket app for Android or iOS.