A rugged start, solid finish for McIlroy at British Open

For the first time in 11 months, Rory McIlroy walked off the 18th green in the early stages of a major championship and did not see his name atop the leaderboard. 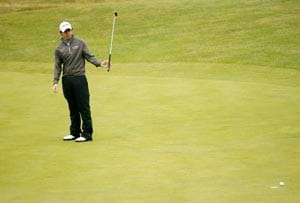 For the first time in 11 months, Rory McIlroy walked off the 18th green in the early stages of a major championship and did not see his name atop the leaderboard.

That's how good he has been at golf's biggest events.

And the way he rallied from a rugged start on Thursday in the British Open, McIlroy didn't think his 1-over 71 was all that bad.

"Anywhere around even par was a good start," McIlroy said.

Facing enormous attention coming off his wire-to-wire win at the U.S. Open last month, McIlroy made a few key putts in the middle of his round to steady himself against a stiff breeze at Royal St. George's.

He was six shots behind Thomas Bjorn, who played extraordinary golf in the tougher morning conditions of wind and some rain.

Trailing by any margin can only be considered a strange spot for McIlroy based on his recent, amazing history. He has been in the lead after seven of the last eight rounds in the majors, the exception being the 80 he shot in the final round at the Masters to lose a four-shot lead.

This day was different. And if the 22-year-old from Northern Ireland didn't know it, then he at least heard it.

The media has been building him up as golf's next star after his record-setting performance at Congressional. And when he stepped on the first tee with a freshening wind off the Strait of Dover, the cheers resounded the length of the 444-yard opening hole.

"It was great," he said. "I probably didn't take it in as much as I could have. I was just trying to concentrate on that first tee shot and get that out of the way. But it's nice to have that support out on the golf course. It's fantastic. Hopefully, I can give them something to shout about."

It took awhile in the opening round.

The biggest cheer came for 22-year-old Rickie Fowler, who holed a 75-foot putt from just off the back of the first green. McIlroy also went long, just a few inches in front of Fowler, and he rammed his long putt some eight feet past the hole and wound up three-putting for bogey.

Then came the par-3 third, when McIlroy got one of the wild, hard hops so often seen at Royal St. George's wound up in rough behind the green. The chip came out heavy, leading to another bogey. And his next tee shot went into deep grass in front of a large knoll.

Suddenly, this didn't look like the U.S. Open champion. It looked like the kid who shot 80 the last day at Augusta National.

McIlroy powered a short iron out and onto the green, hit a superb chip from well left of the green at No. 5 to five feet to save par, and before long was back in his comfort zone.

It helped being paired with Fowler, an American of the same age, same style of play - they both waste no time hitting their shots - and with short history for being so young. McIlroy and Fowler competed against each other in foursomes at the Walker Cup four years ago when both were teenagers at Royal County Down.

That was a home game for McIlroy, and this was not much different.

"The fans were great over here," Fowler said. "Obviously, they're cheering on Rory. It has a feeling like he's a hero over here now. He's had a pretty big impact, with impressive play recently and obviously at the U.S. Open. So it's fun to play alongside him. I've always enjoyed it, and definitely felt like the crowd was in his favor today."

Fowler looked to be the better of the two on this day, but not so much at the end. Fowler stalled in his round of 70. McIlroy rallied for a 71, starting with a smart approach on the eighth hole that rode up a ridge and trickled back toward the hole to four feet away for birdie.

Equally important was the short, tricky par putt on the ninth.

For all the hype outside the ropes, McIlroy clearly felt at ease doing what he does best. He was in his element, flashing that smile to the gallery as he bobs along the fairway between shots.

"I felt the par on 4 was big, but the up-and-down on 5 from left of the green was big for me, got me into it a bit," he said. "I was a little disappointed I didn't take advantage of the two par 5s - put myself in good positions off the tee there and only made two pars. But it was definitely a round after the start that could have got away from me, and it was nice to hang onto it."

More media awaited after he finished up his round, to another rousing ovation. Everyone wants a piece of McIlroy these days. Everyone expects him to contend, especially in the majors.

"It's a nice pressure to have," McIlroy said. "I'm not complaining. I've put myself in this position, and it's what I've always wanted to do. I wanted to be under pressure to win tournaments. I mean, if that's the worst complaint that I have, I'll be doing all right."

He wasn't great Thursday. He didn't shoot himself out of the tournament, either.

He was doing all right.

Comments
Topics mentioned in this article
Golf Rory McIlroy Luke Donald Thomas Bjorn Tom Lewis
Get the latest updates on IPL 2020, check out the IPL Schedule for 2020 and Indian Premier League (IPL) Cricket live score . Like us on Facebook or follow us on Twitter for more sports updates. You can also download the NDTV Cricket app for Android or iOS.