Scotland, whose hopes of qualifying had long since disappeared, earned a morale-boosting 2-0 victory over Croatia. 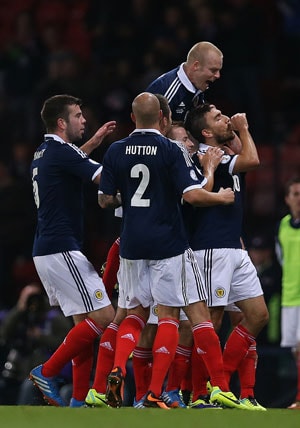 Robert Snodgrass and Steven Naismith were the heroes as Scotland ended an unsuccessful Group A qualifying campaign on a high with a 2-0 win over Croatia at Hampden.

After a slow start Scotland grabbed a 28th minute lead as Norwich City forward Snodgrass, the goal-scorer in his side's 1-0 win in Zagreb in June, got on the end of Charlie Mulgrew's cross to power a header past Stipe Pletikosa.

Croatia, already secured of second place in the group, fired into the side netting through substitute Eduardo before Scotland added to their advantage after they were awarded a 73rd minute penalty.

Barry Bannan's soft spot-kick was saved well by Pletikosa but Naismith, who was winning his 25th cap, followed up to fire the rebound into the bottom corner.

Scotland manager Strachan, was happy to see his side pick up their first win at Hampden in over two years.

"It was a nice way to finish the week. It's been enjoyable but hard work and when you put that kind of hard work in it's always nice to get a performance and a win," Strachan said.

"It was a big difference from the first game against Wales but the players have gradually turned it around and they can be really proud of themselves."

Croatia coach Igor Stimac, whose side still secured a place in the play-offs, said he had offered his resignation to Davor Sukor, president of the Croatian Football Federation, immediately after the game.

"It is a bad defeat I have to say. I offered my resignation because of the latest results of the national team," said Stimac, who was part of the Croatia side that secured third place in the World Cup in France 1998.

"I need to show a moral responsibility and if there is anyone who doesn't believe in my work in Croatia I want to give them the chance to change something now."

Scotland, whose hopes of qualifying had long since disappeared, went into the match hoping to avoid finishing last in Group A and becoming the first Scotland side not to win a home match during a qualification campaign.

Strachan made three changes to the side that won in Macedonia last month as keeper Allan McGregor returned from injury along with James Morrison and Norwich City's Snodgrass.

Croatia had nine players, including Luka Modric and Niko Kranjcar, who were one booking away from a suspension that would rule them out of the first leg of any potential play-off match. However Stimac refrained from any wholesale changes with Dnipro's Nikola Kalinic - one of only four changes from Friday's defeat to Belgium - firing a fourth minute drive wide from 20 yards as Croatia dominated the early possession.

The home side survived a scare in the 23rd minute when a poor clearing header from Grant Hanley landed at the feet of Mario Mandzukic in the box but the Bayern Munich man dallied too much on the ball and Ikechi Anya poked the ball away to safety.

Minutes later Scotland took a surprise lead through Snodgrass. Mulgrew won possession on the halfway line and after receiving a return pass from Naismith sent in a cross that Snodgrass powerfully headed past Stipe Pletikosa after shrugging off the challenge of Dejan Lovren.

The visitors brought on forward Eduardo in their hopes of an equaliser and the former Arsenal man came close in the 65th minute when he was sent clear on goal but he went too wide as he rounded keeper McGregor and fired into the side netting.

Scotland were awarded a penalty after Anya appeared to have his heels clipped by Domagoj Vida in the box. Bannan's spot-kick was saved by Pletikosa but the keeper could do nothing to stop Naismith firing in the rebound.

Comments
Topics mentioned in this article
Football Bayern Munchen Robert Snodgrass Steven Naismith
Get the latest updates on IPL 2021, IPL Points Table , IPL Schedule 2021 , live score . Like us on Facebook or follow us on Twitter for more sports updates. You can also download the NDTV Cricket app for Android or iOS.