Who is Lionel Messi?

The wealthiest footballer according to most estimates. The most popular sporting figure in the world by common consensus. And possibly, the most talented footballer the world has ever seen. That is who Lionel Messi is! 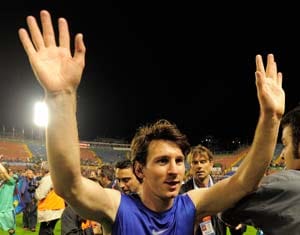 Born to a factory worker and a part-time cleaner in Argentina, Lionel Messi has risen from being a skilled child footballer to a maverick international star who has claimed almost every award in the world of football. On Monday (January 8), the 25-year-old added another title to his long list of awards - Ballon d'Or, his fourth.

Capping a season last year which saw him take pit-shots at the goal - a record 91 times - with charismatic ease, Messi's start to the year could not have been better. Rival Cristiano Ronaldo was being seen as an equally deserving candidate for the prestigious award although the mammoth size of the fan-base that each player commands, remained divided and had their own reasons to justify why their respective heroes should be honoured. It was the Barcelona player who eventually managed to pip past Ronaldo although the Portuguese is a symbol of modern soccer in his own right.

Messi too has been a prolific player for a number of years now - his fans would say he is not comparable to any other. At 5 feet 7, he is not an imposing figure, at least not one who looks the part - he was diagnosed with a growth hormone deficiency while still a child. Throw him a football though and watch the magic unfold.

Messi's magic has been on ample display from his young days. Known as the 'Machine of 87' after the year in which he was born, his introduction to the sport was when he was 5-years-old. Some say that football was in his blood as his family had its roots in Ancona (Italy). Messi however, had the Latin American charm and passion for the sport - his talent for it however being well beyond geographic and cultural descriptive limitations.

There were minor early setbacks too but nothing could have halted the dream of a young 11-year-old. Messi was diagnosed with his hormonal deficiency just about when local champions River Plate expressed their interest in him. According to reports though, the club did not have enough funds to treat Messi's condition - 900 US dollars a month. That is when the sports director of FC Barcelona contacted Messi's father after having heard of his son's talent. Jorge Horacio Messi was told that Lionel would have to shift to Spain and that FC Barcelona would fund his treatment. And began the start of an association which continues till date and brings the loudest cheers from millions of fans. Other clubs have attempted to buy Messi out for staggering amounts but the player has remained with the dominant Spanish club.

Barcelona has become one of the most formidable clubs in the world. Teams aspire to follow the high standards set by the La Liga side. To only credit Messi would be unfair as several factors have contributed to its fortunes. To say that Lionel Messi has been at the forefront of taking the club forward however would be an apt description.

Playing for the junior teams, Messi quickly showcased his talents which left fans and officials highly impressed. Not surprisingly then, his promotion to the senior team was only a matter of time. At 17 years and 114 days on October 16, 2004, the player made his league debut. Since, Camp Nou and each other place which witnesses Messi do the ballet with the ball, screams in disbelief and then roars with delight at the sheer poetry in motion. The same is true for when he plays international matches for Argentina as well. Of course, there have been injuries as is part of a sportsperson's life but they have hardly managed to dent this man's ability.

While some fans say a television set can never do justice to watching Messi play at the stadium, there is common consensus though that Lionel Andres "Leo" Messi is a prodigy who deserves each of his successes, every bit of his fame, all of the massive fan-base and every single award - and the proportions of each of these is gigantic. 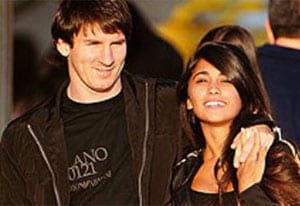 While there have always been speculations on who Lionel Messi has been dating, the player confirmed in 2009 that his love was in Argentina. That love has manifested into a mature and serious relationship with girlfriend Antonella Rocuzzo giving birth to their son in November last year.

Apart from being a sensational player and a newly turned doting family man, Messi has also been involved in charity work. He is one of the wealthiest sportspersons in the world but is equally known for working in his charity institution - Leo Messi Foundation - which helps vulnerable children.

Comments
Topics mentioned in this article
Football Barcelona Cristiano Ronaldo Lionel Messi
Get the latest updates on ICC T20 Worldcup 2022 and CWG 2022 check out the Schedule, Live Score and Medals Tally. Like us on Facebook or follow us on Twitter for more sports updates. You can also download the NDTV Cricket app for Android or iOS.