Wesley Sneijder, Georginio Wijnaldum netted a goal each to help The Netherlands register an all important 2-1 win over Kazakhstan in their Euro 2016 qualifier. 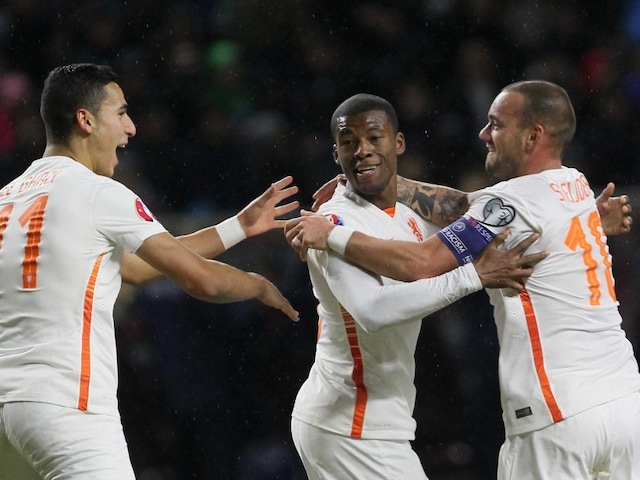 The Netherlands got a key victory in its quest to qualify for Euro 2016, defeating Kazakhstan 2-1 here in a match the Dutch led comfortably for most of the second half. (Wales End 57-Year Wait)

Robin van Persie took the field late in the game for his 100th national team cap on Saturday and head coach Danny Blind picked up his first win in three matches.

The Dutch also had to make do without starting net minder Jasper Cillessen, who injured his back during the warm-up. (Italy Qualify for Euro 2016)

The only cause for optimism were the Kazakh opponents, who are tied with Luxembourg for No. 142 in FIFA's world rankings and exactly one year ago lost to the Netherlands 3-1 at the Amsterdam Arena.

Attacking midfielder Giorginio Wijnaldum opened the scoring in the 33rd minute with a left-footed shot from outside the area that curled past Kazakh goalkeeper Stas Pokatilov.

The Netherlands then increased their lead a few minutes after half-time when midfielder Wesley Sneijder received a pass from striker Klaas Jan Huntelaar down the left side and fired a shot into the roof of the goal.

Kazakhstan finally got on the scoreboard shortly after Dutch goalkeeper Tim Krul was injured in a collision with defender Jeffrey Bruma.

With third-string goalie Jeroen Zoet on the field, Kazakh midfielder Islambek Kuat received a header from striker Sergei Khizhnichenko and knocked the ball in the back of the net from close range in the final play of the game.

Minutes earlier, Van Persie had been sent on as a substitute and became the eighth player in the history of The Netherlands' national soccer team to win 100 caps.

With the win, Holland (13 points) moved one point ahead of Turkey, who square off in Group A action on Saturday night against the Czech Republic in Prague, in the battle to earn a spot in the qualifying playoff for Euro 16 to be played in France.

Comments
Topics mentioned in this article
Wesley Sneijder Netherlands Football
Get the latest Cricket news, check out the India cricket schedule, Cricket live score . Like us on Facebook or follow us on Twitter for more sports updates. You can also download the NDTV Cricket app for Android or iOS.