Perth Glory's Andy Keogh said it would be a "kick in the teeth" to footballers if Usain Bolt earns a professional contract with Australia's Mariners. 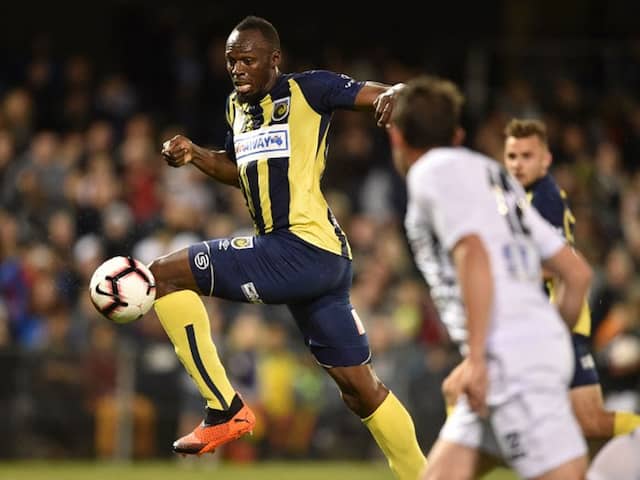 Usain Bolt's contract talks with Central Coast Mariners have stalled and he is no longer training.© AFP

Former Ireland striker Andy Keogh blasted Usain Bolt as having "a touch like a trampoline" as the coach of the Central Coast Mariners refused to say whether he believes the sprint star can make it as a footballer. Keogh, who plays for Perth Glory, on Friday said it would be a "kick in the teeth" to footballers if the eight-time Olympic champion earns a professional contract with Australia's Mariners. The 32-year-old Jamaican, who retired from athletics last year, has been on trial with the A-League club since August but contract negotiations have stalled and he is no longer training.

Sydney's Daily Telegraph reported this week that Bolt's representatives were initially seeking Aus$3 million (US$2.1 million) but the Mariners have offered closer to Aus$150,000.

The Mariners have said it appears unlikely the Jamaican will sign unless a third-party agreement can be found to deliver him more money.

Keogh, who used to play for Wolves and Cardiff, was blunt in his assessment of Bolt's footballing prowess.

He told Fox Sports the 100m world-record holder had a touch "like a trampoline" and that "he's not going to be able to make it".

"It's nice to have the attention on the A-League but him playing in the A-League, that's not for me," said Keogh, who made 30 appearances for his country.

"He's shown a bit (of potential) but it's a little bit of a kick in the teeth to the professionals that are in the league."

He added that "if there's someone who genuinely thinks he'd be a good football addition, I don't think they should be in a position to make those calls".

Mariners boss Mike Mulvey was peppered with questions about Bolt at a press conference Friday, batting most of them away.

"There's no update. He's not at training and I'm just concentrating on the lads I have here," he said, insisting the Bolt saga was not a distraction.

Pressed on whether Bolt had the ability to make it as a footballer, he replied: "I'll say this one more time -- my focus is on the game on Saturday and on the players contracted for the Central Coast Mariners and that is how it should be."

Bolt, who retired from athletics last year, has previously tried out with clubs in Germany, South Africa and Norway.

He recently turned down a two-year, trial-free deal from cashed-up Maltese champions Valletta.

Comments
Topics mentioned in this article
Football Usain Bolt
Get the latest Cricket news, check out the India cricket schedule, Cricket live score . Like us on Facebook or follow us on Twitter for more sports updates. You can also download the NDTV Cricket app for Android or iOS.