The United States beat Mexico 3-2 to win the inaugural CONCACAF Nations League, with a wild extra-time finish featuring a spot-kick from Christian Pulisic and a penalty save from substitute keeper Ethan Horvath. 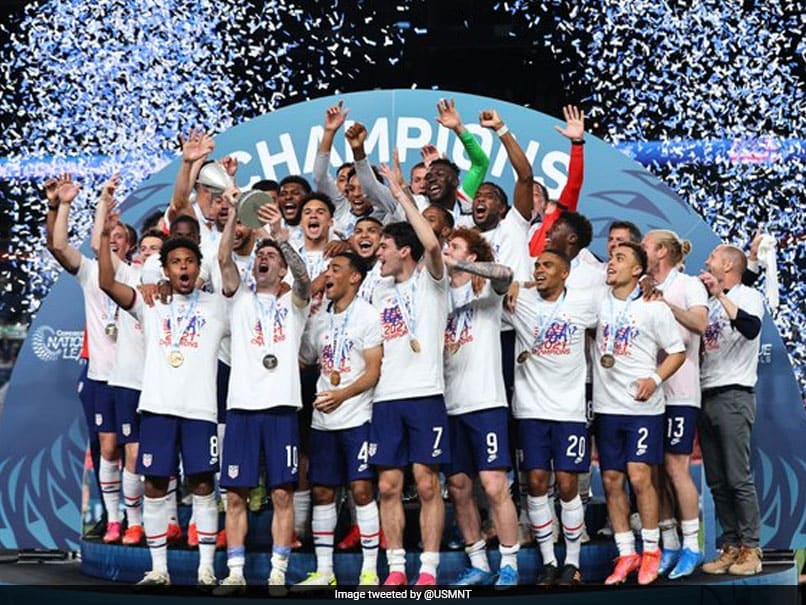 CONCACAF Nations League: The United States came from behind twice to beat Mexico in the final.© Twitter

The United States beat Mexico 3-2 to win the inaugural CONCACAF Nations League Sunday, with a wild extra-time finish featuring a penalty from Christian Pulisic and a penalty save from substitute keeper Ethan Horvath. The United States came from behind twice -- from 1-0 and from 2-1 down -- to force extra time before a raucous crowd at Empower Field. The score was knotted at 2-2 after regular time and in the 114th minute Chelsea striker Pulisic put the United States ahead for the first time when he converted a penalty awarded after a VAR review.

Six minutes later Andres Guardado's attempt from the spot -- awarded after VAR confirmed a handball by Mark McKenzie in the penalty area -- was turned away by Horvath.

By then, Mexico's Argentinian coach Gerardo "Tata" Martino had been sent off, apparently for draping an arm over Panamanian referee John Pitti as he checked the video on the tackle by Carlos Salcedo that brought down Pulisic in the box.

The decision to grant the penalty prompted Mexico fans to shower the pitch with debris.

Mexico had been quick out of the blocks, seizing a 1-0 lead in the second minute through Jesus Corona.

Gio Reyna answered for the United States in the 27th -- minutes after Mexico thought they had gone up 2-0 on a header by Hector Moreno that was disallowed upon VAR review because he was a hair offside.

That set the stage for Reyna, the 18-year-old Borussia Dortmund midfielder, who fired in the rebound when Weston McKennie's header off a Pulisic corner kick rebounded off the post.

Second-half substitute Diego Lainez restored Mexico's lead in the 79th, slotting a shot past Horvath who had come on in the 67th when Steffen departed with an apparent leg injury.

Once again the United States pulled level, McKennie slipping a header past Mexico keeper Guillermo Ochoa into the side net.

The two sides remained deadlocked after regular time and the first period of extra time.

Then Pulisic, fresh off Chelsea's Champions League triumph, went down in the box as he was challenged by two Mexico defenders.

Pitti initially didn't award the spot kick, but changed the call after a lengthy break for the review, during which tension mounted on the pitch and in the stands.

Pulisic took two steps and rifled the ball over Ochoa into the top corner.

When another VAR review confirmed McKenzie's handball, Guardado, playing in his 116th international, took it with confidence but Horvath dived to his right for the sprawling save.

"I'm kind of speechless to be honest," Horvath told a television interviewer.

"If you're on the bench as a keeper you don't expect to come in the game," he added. "It's just a whole bunch of emotion. It's a special moment for me in my hometown of Denver."

The United States earned their second win in seven CONCACAF tournament finals against Mexico, its first since the 2007 Gold Cup.

For Martino, it was a first final loss since he has been in charge of El Tri, after winning the 2019 Gold Cup against the United States.

In the third-place playoff earlier Sunday, Honduras beat Costa Rica 5-4 on penalties after the sides played to a 2-2 draw in regular time.