Antonio Conte made a number of changes from his usual starting 11 for the clash against the Danish title-holders, who have endured a mediocre start to their domestic season. 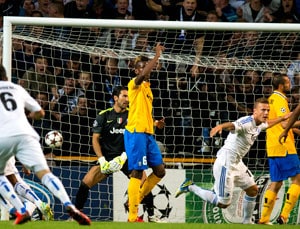 Despite a dominant second-half display, Juventus had to settle for a 1-1 draw in their Champions League Group B opener away to FC Copenhagen on Tuesday.

Nicolai Jorgensen gave the hosts a 15th-minute lead but, after riding their luck in the first half, the Danes fell to a 54th-minute equaliser from Fabio Quagliarella.

Juve went on to dominate after the interval but were thwarted by a combination of 'keeper Johan Wiland's brilliance as well as their own inaccuracy.

"It's good to create so many chances but we need to put the ball in the back of the net," said Juventus coach Antonio Conte.

"We've never had so many goalscoring chances so close to the goalline. But that's football and we can't be unhappy about our performance."

Conte made a number of changes from his usual starting 11 for the clash against the Danish title-holders, who have endured a mediocre start to their domestic season.

Although Carlos Tevez saw a fifth-minute strike go just wide following Andrea Pirlo's delivery, Copenhagen were celebrating first when Jorgensen bundled the ball past Gianluigi Buffon in goal after the Juve defence had failed to deal with a free-kick.

Quagliarella almost levelled for Juve moments later when he tested Wiland after the 'keeper had spilled Tevez's shot.

Wiland then produced two superb saves in succession to thwart the Italians.

He first tipped a Giorgio Chiellini header over the bar from close range and then, from the subsequent corner, he kept out Paul Pogba's effort with his knee to send the ball hurtling over the bar.

Juventus spurned another chance when Swiss international Stephan Lichtsteiner scuffed a volley well over the bar from close in following Peluso's cross.

Juve resumed in determined fashion after the break and, after Tevez shot straight at Wiland while unmarked from 10 yards out, Quagliarella beat the 'keeper with a first-time shot from Peluso's incisive pass on the left.

It was the second consecutive year the striker, used sparingly by Conte in Italy's top flight, had rescued the Bianconeri in their Champions League opener having levelled against Chelsea to secure a 2-2 draw at Stamford Bridge this time last year.

Quagliarella almost made it two 10 minutes later but Wiland pushed the striker's header over.

At the other end Jorgensen slipped through Pirlo and Ogbonna to unleash a shot which sailed just over Buffon's crossbar.

With 15 minutes to play Conte replaced Quagliarella with Sebastian Giovinco, but it was Tevez who produced Juve's next chance, the Argentine's volley from 15 yards forcing Wiland to parry down low.

Juve then produced a hatful of chances in the following 10 minutes.

Wiland stopped Arturo Vidal while on a one-on-one and then Pogba missed with a header from Pirlo's cross.

Wiland also pushed Giovinco's shot away while Tevez spurned a golden chance for an injury-time winner when he missed the net by inches with the goal at his mercy.

Comments
Topics mentioned in this article
Football West Ham United Chelsea Juventus Stadium Lazio Genoa Napoli AC Milan Catania Fiorentina Atalanta FC Copenhagen Chievo Juventus Fulham Brede Hangeland Nicolas Anelka
Get the latest updates on India vs Australia Series, check out the India vs Australia Schedule for 2020-21 and Ind vs Aus live score . Like us on Facebook or follow us on Twitter for more sports updates. You can also download the NDTV Cricket app for Android or iOS.