The fragile peace between Togo coach Didier Six and his star player Emmanuel Adebayor has been shattered following the team's quarter-final loss to Burkina Faso. 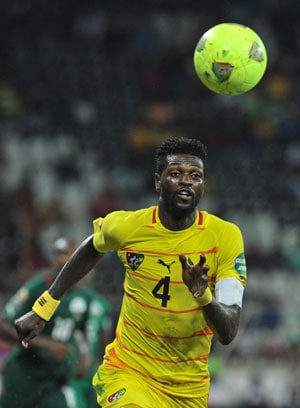 The fragile peace between Togo coach Didier Six and his star player Emmanuel Adebayor has been shattered following the team's quarter-final loss to Burkina Faso.

In the aftermath of Sunday's 1-0 extra-time defeat, Adebayor rounded on the inexperienced Six in a no-holds-barred attack on the Frenchman's style of management.

"The coach was not a help! Me, I was on the pitch, so I couldn't do both jobs (coaching and playing).

"I tried to do my best, but it's true he didn't help us," the Tottenham striker told French radio station RFI.

Adebayor's sentiments were endorsed by Togo goalkeeper Kossi Agassa, who in a not-so-veiled criticism of Six's tactical nous said: "It's not up to the players on the pitch to make changes."

Six, when contacted by AFP, said that he wanted to have "a cool head before making an assessment" of Togo's Nations Cup campaign and the reaction from Adebayor and Agassa.

But he went on to point out that: "I took them (the team) to a place where they had never been before," referring to Togo's first appearance in a Nations Cup quarter-final.

Togo's build-up to the 2013 Nations Cup was dominated by a 'will-he-won't-he' saga involving Adebayor's participation following a series of run-ins with the Togolese Football Federation over matters of security, management and bonuses.

Adebayor told RFI: "If the Togo team is organised in the best way possible, I will alweys be there for it.

"It's true that I hear each time 'he's coming, he's not coming' -- but that's because there are lots of problems.

"If these problems are resolved, I will be there.

"You've seen that I give the best of myself. I speak in the dressing room, I'm a leader, I'm the captain."

"We came here with the idea of winning the Nations Cup, to go to the final and, unfortunately, we were knocked out by Burkina. The disappointment is more than enormous."

Despite his attack on Six, he insisted that now was not the time to look for scapegoats.

"The most important thing is to return home quietly and tomorrow we'll see what everyone has to say."

On his international future, Adebayor said: "My international career is not stopping here. I've been in a Nations Cup quarter-final, now I think I've got the qualities to go to the semi-finals, and a final, and to win the title.

"But you know as well as I do that our management isn't really up to that.

"With our performance at this Nations Cup, the country, the president of the republic, the fans have seen what we are capable of. Now it's up to them to invest so that we can organise in the best manner possible."

Togo's Cup campaign came to an end when Jonathan Pitroipa broke the deadlock on 105 minutes to book the Burkinabe a semi-final meeting with Ghana in Nelspruit on Wednesday.

Comments
Topics mentioned in this article
Football Emmanuel Adebayor
Get the latest updates on ICC Women's Cricket World Cup 2022 and IPL 2022, check out the Schedule , Live Score and IPL Points Table. Like us on Facebook or follow us on Twitter for more sports updates. You can also download the NDTV Cricket app for Android or iOS.