Metalist signed Taison in 2010, following his quick rise to prominence at Brazil's Internacional. 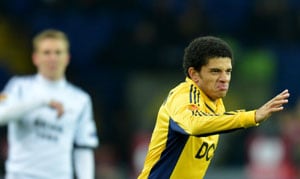 Shakhtar says its original offer of $15 million was rejected, but the $20 million offer triggered a clause in Taison's contract in which he could leave Metalist.

Taison has seven goals in European competition, and 13 goals in 25 Ukrainian league games.

Metalist signed Taison in 2010, following his quick rise to prominence at Brazil's Internacional.

Comments
Topics mentioned in this article
Football Shakhtar Donetsk
Get the latest updates on ICC T20 Worldcup 2022 and CWG 2022 check out the Schedule, Live Score and Medals Tally. Like us on Facebook or follow us on Twitter for more sports updates. You can also download the NDTV Cricket app for Android or iOS.