Napoli came from a goal down to beat Sampdoria 2-1 at the newly-named Stadio Diego Armando Maradona while Inter Milan beat Cagliari 3-1. 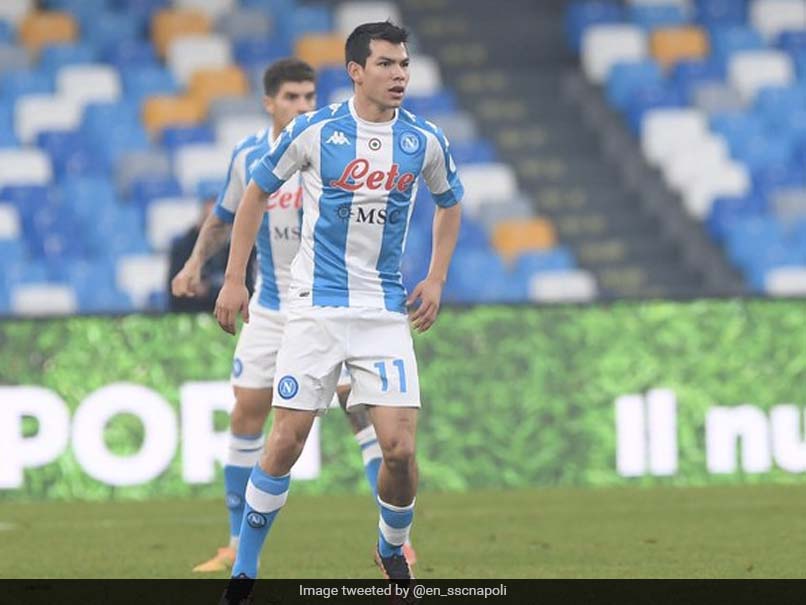 Hirving Lozano came off the bench to score a goal and provide an assist for Napoli.© Twitter

Napoli got their first win in the newly-named Stadio Diego Armando Maradona on Sunday, beating Sampdoria 2-1 to move third in Serie A behind Inter Milan, who fought back to see off Cagliari 3-1. Napoli needed to come from behind in the stadium renamed a week ago following the death of club legend Maradona last month. Maradona led the club to their only league titles in 1987 and 1990 and the UEFA Cup in 1989. The match in Naples was preceded by a minute's silence in memory of Italy's 1982 World Cup winner Paolo Rossi, who died on Wednesday, aged 64.

Jakub Jankto put Sampdoria ahead in the 20th minute, but Hirving Lozano came off the bench in the second half to spark a Napoli revival.

Lozano got his head to a Dries Mertens cross seven minutes after the break with the Mexican international then crossing for Andrea Petagna to nod in the winner with 22 minutes remaining.

Antonio Conte's Inter were trailing with a quarter of an hour to go in Sardinia, after Riccardo Sottil put the hosts ahead before the break and a series of fine saves from home goalkeeper Alessio Cragno.

Former Cagliari player Nicolo Barella volleyed in the equaliser after 77 minutes with Danilo D'Ambrosio coming off the bench to immediately nod in a second with six minutes to go.

"I'm really happy with their reaction because the lads still had the Shakhtar games on their minds," said Conte.

"We went a goal down despite a great first-half performance and numerous chances created.

"(Cagliari goalie) Cragno was their best player on the pitch, but the lads believed right up to the end and showed they wanted to win at all costs."

Inter's hopes in Europe are over after finishing bottom of their Champions League group midweek after a goalless draw with Shakhtar Donetsk, having also failed to score in a stalemate in the Ukraine.

Conte's side are now focusing on claiming a first league title since 2010, and preventing Juventus from winning a 10th consecutive 'Scudetto'.

Roma got back to winning ways with an emphatic 5-1 victory at Bologna to move fifth, one point ahead of Juventus.

All six goals came in the first half at the Stadio Renato Dall'Ara.

Bologna's Andrea Poli turned into his own net after five minutes before Edin Dzeko added a second to give the hosts a two-goal advantage after 10 minutes.

The Bosnian became the third highest scorer in Roma's history with his 111th club goal.

Lorenzo Pellegrini, Jordan Veretout and Henrikh Mkhitaryan added three more before the break, with a Bryan Cristante own goal putting Bologna on the scoresheet.

In Bergamo, Atalanta eased past Fiorentina 3-0, days after qualifying for the Champions League last-16.

Robin Gosens opened the scoring just before half-time when he finished off a Duvan Zapata cross.

A Ruslan Malinovskyi free-kick nine minutes after the break, and a Rafael Toloi header in the 63rd minute secured all three points for the northeners who are in eighth position with a game in hand.

Fiorentina are in 17th position after their sixth league match in a row without a win.

Roma Football
Get the latest updates on ICC T20 Worldcup 2022, check out the Schedule and Live Score. Like us on Facebook or follow us on Twitter for more sports updates. You can also download the NDTV Cricket app for Android or iOS.