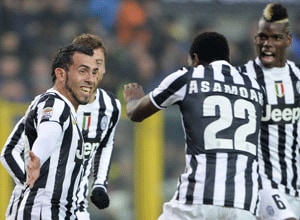 Juventus won 4-1 at Atalanta in Serie A on Sunday but Roma eased to a 4-0 victory over bottom club Catania to keep up the pressure on the league leader and two-time defending champion.

Second-place Roma remained five points behind after a double from Mehdi Benatia and goals from Mattia Destro and Gervinho.

Fiorentina moved closer to the top three and a Champions League berth as leading Serie A goalscorer Giuseppe Rossi helped it to a hard-fought 1-0 win at Sassuolo.