Juventus Lose To Roma In Season Finale, Inter Milan Second In Serie A

It was Juventus's second consecutive defeat since sealing a ninth Serie A title in a row, just days before their Champions League campaign resumes against Lyon. 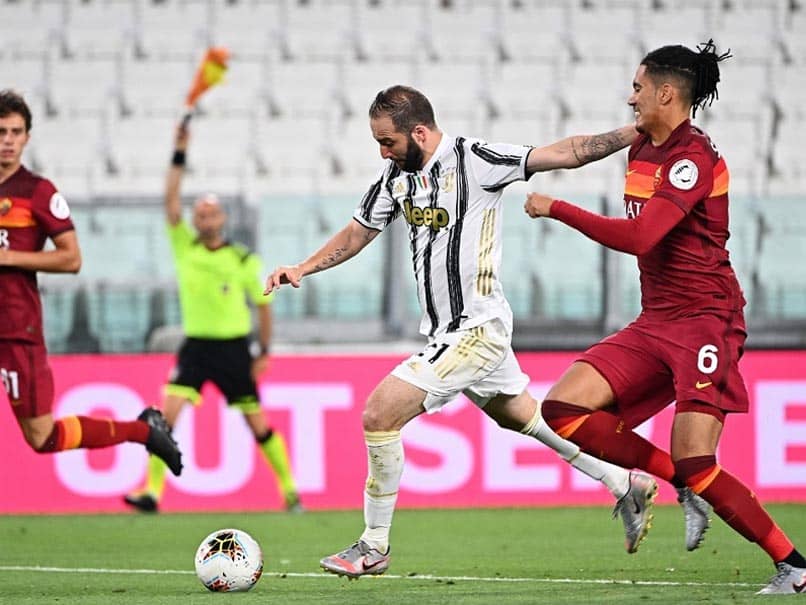 Juventus finished their Serie A campaign with a 1-3 home defeat to Roma on Saturday.© AFP

Juventus crashed to their second consecutive defeat as the Serie A champions finished their season with a 3-1 home loss against Roma on Saturday, days before their Champions League campaign resumes. Inter Milan took second place with a 2-0 win over direct rivals Atalanta in Bergamo, who fell to their first league defeat since January. Juventus had already wrapped up their ninth straight league title and are looking towards their last 16 home game against Lyon next Friday when Maurizio Sarri's side need to overturn a 1-0 first-leg deficit.

Cristiano Ronaldo was rested for the final match with nothing left to play for against fifth-place Roma who are already assured of the Europa League group stage next term.

Sarri had threatened to field Juventus's Under-23 team after his tired troops fell 2-0 to Cagliari during the week.

Argentine Gonzalo Higuain spearheaded the Juventus attack and finished off an Adrien Rabiot cross after just six minutes in the Allianz Stadium.

But Diego Perotti inspired a Roma fightback setting up Nikola Kalinic to nod in the equaliser after 23 minutes.

Perotti gave Roma the lead from the penalty spot before the break and six minutes into the second half connected with a Nicolo Zaniolo cross for his second of the night as Juventus fell to their third defeat in four matches.

Inter Milan finish just one point behind the champions after winning the three-team race for second spot.

Antonio Conte's side ended Atalanta's 17-match unbeaten run going back to January 20, to finish the season on a high before they play Getafe in the Europa League next week.

Danilo D'Ambrosio nodded in the first goal after just one minute with Ashley Young doubling their lead after 20 minutes with a stunning curling shot.

Atlanta, who meet Paris Saint-Germain in the Champions League quarter-finals, finish in third place for their second consecutive season.

Lazio finished fourth, equal on points with Atalanta, having been pushing for the title just one point behind Juventus when the season resumed on June 20.

Simone Inzaghi's side fell 3-1 to Napoli but forward Ciro Immobile scored his 36th goal of the season to equal the record for the most goals in a Serie A campaign.

The 30-year-old Italy international tapped in after 22 minutes to match Argentina forward Higuain's record of 36 goals, set while playing for Napoli in the 2015-16 season.

Immobile will also win the European Golden Shoe for the continent's top scorer this term, having overtaken Bayern Munich striker Robert Lewandowski's tally of 34 in midweek.

Napoli warmed up for their Champions League last 16 second leg game over Barcelona with a win, but lost captain Lorenzo Insigne, who scored on the night, to injury.

In the San Siro, Zlatan Ibrahimovic missed a penalty but scored his 10th league goal since January as AC Milan finished with a 3-0 win over Cagliari.

The season concludes on Sunday with Lecce and Genoa playing Parma and Hellas Verona respectivel hoping to avoid joining Brescia and SPAL down in Serie B.

Genoa, in 17th, are just one-point ahead of Lecce, who occupy the final relegation berth.

Ciro Immobile Football
Get the latest updates on India vs England Series, India vs England , live score and IPL 2021 Auction . Like us on Facebook or follow us on Twitter for more sports updates. You can also download the NDTV Cricket app for Android or iOS.