Cristiano Ronaldo opened the scoring deep into first half stoppage time in Turin and then had a hand in Federico Bernardeschi netting the second after 66 minutes. 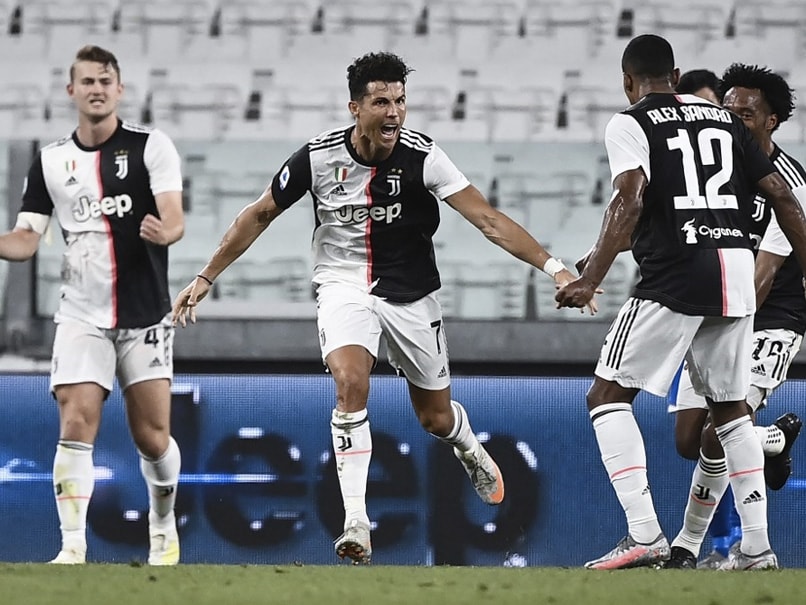 Cristiano Ronaldo powered Juventus to their ninth straight Serie A title in a 2-0 win over Sampdoria.© AFP

Cristiano Ronaldo powered Juventus to their ninth straight Serie A title on Sunday in a 2-0 win over Sampdoria that put them over the line with two matches to spare. Ronaldo opened the scoring deep into first half stoppage time in Turin and then had a hand in Federico Bernardeschi netting the second after 66 minutes. The five-time Ballon d'Or winner missed a late penalty but Maurizio Sarri's side moved seven points ahead of second-placed Inter Milan to seal a 36th 'Scudetto'. The title is Sarri's first and extends a record run which Antonio Conte started with three titles from 2012 and Massimiliano Allegri continued with the following five.

Sarri's team had missed the chance to wrap up the title on Thursday when the 'Old Lady' of Italian football fell to a 2-1 defeat at Udinese.

But they made no mistake at the Allianz Stadium despite being pushed hard by Claudio Ranieri's Sampdoria, one of the most in-form teams since the return of Serie A from the three-month coronavirus lockdown.

"It is the most beautiful success, even the most difficult because we wanted it and suffered," said defender Leonardo Bonucci.

"We started on a new path with a lot of scepticism around us, we gave everything, despite some slip-ups.

"It was a complicated year for everyone in the world, it was difficult to return after so many months not playing."

Despite his 35 years Ronaldo shrugged off the quick succession of matches played in hot summer weather after the lockdown, bringing his tally to 31 this season.

The Portuguese striker has scored 10 goals since football returned in Italy on June 20, more than any other player in Europe.

He also matched former Italy World Cup winner Felice Borel, who was the last player to score 31 goals for Juventus in the 1933-34 season.

But he remains three goals behind Serie A's leading scorer Ciro Immobile, who scored a hat-trick earlier in Lazio's 5-1 win over Hellas Verona.

"Delighted for the second consecutive championship and to continue building the history of this great and splendid club," said Ronaldo on Instagram.

"This title is dedicated to all Juventus fans, in particular to those who have suffered and are suffering from the pandemic that has taken us all by surprise by overturning the world.

"It was not easy! Your courage, your attitude and your determination were the strength we needed to face this tight final of the championship and fight to the end for this title that belongs to all of Italy.

The breakthrough came in the final move of the first half, when Pjanic cleverly rolled a pass across the penalty area to allow Ronaldo to lash home his 31st league goal of the season.

Juventus made sure of the title in second half when Bernardeschi pounced on the rebound of a Ronaldo shot and tapped in a decisive finish.

Sampdoria had no way back into the game and had to play the final 20 minutes a man down when Morten Thorsby was sent off for a second yellow card.

But the match could prove costly for Juventus before the return leg of their Champions League last 16 tie against Lyon on August 7, when they need to overturn a 1-0 deficit from the first match in France.

Danilo took a knock, while influential forward Paulo Dybala limping off with a muscular problem early in the match will be a worry for Sarri with Lyon's visit to Turin less than two weeks away.