Francesco Totti inspired Roma to a 3-0 win over Chievo to give Rudi Garcia's side a boost ahead of a more formidable challenge against Champions League Group E rivals Bayern Munich on Tuesday. 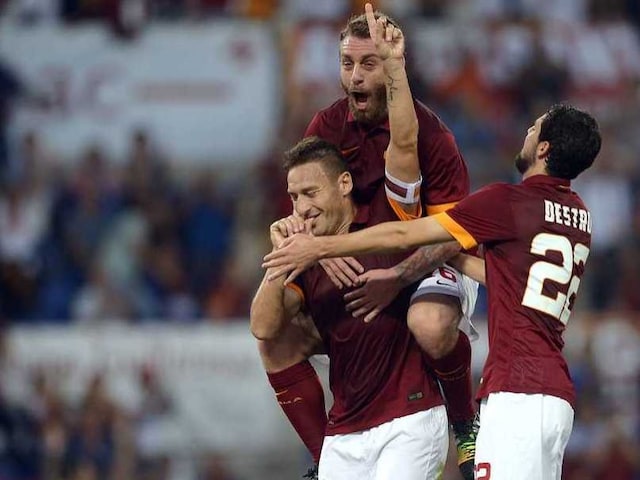 AS Roma forward and captain Francesco Totti (L) celebrates with teammates Daniele De Rossi and Mattia Destro (R) after scoring during the Italian Serie A football match Roma vs Chievo on October 18, 2014 at the Olympic stadium in Rome.© AFP
Milan:

Leaders Juventus saw their 13-game winning streak come to an end in a 1-1 draw away to rock-bottom Sassuolo on Saturday as title rivals Roma closed to within one point of the Serie A lead.

Francesco Totti inspired Roma to a 3-0 win over Chievo earlier in the day to give Rudi Garcia's side a boost ahead of a more formidable challenge against Champions League Group E rivals Bayern Munich on Tuesday.

Juve remain top of the pile but four days ahead of visiting Champions League Group A rivals Olympiakos, the Italian champions have dropped their first points of the season.

"Technically, we didn't play well and we just couldn't find the goal as we usually do," Allegri told Sky Sport Italia.

"But we accept the draw. Now we have to go and look at what didn't work tonight."

Chievo had scored just once on six previous visits to the Stadio Olimpico and barely mustered a shot on goal all night as Roma, who dropped their first points of the season two weeks ago in a bad-tempered 3-2 loss away to Juventus, went about their business with consummate ease.

Chievo defender Dario Danielli, who gave away the foul that led to Totti's first-half spot-kick, compared this Giallorossi side to the one that Totti inspired to the scudetto in 2001.

"Conceding a goal against such a quality side messes up all your plans," Danielli told Sky.

"It's one of the best Roma sides I've come up against. Only the one that won the title in 2001, in my opinion, was better."

Garcia -- who rested Ivorian striker Gervinho with a view to Tuesday's clash -- admitted facing Bayern would be an altogether different affair.

"Bayern are ready... but we're counting on a red hot atmosphere at the Olimpico. We can't wait, it will be a fantastic game."

Roma took the lead after only four minutes when Mattia Destro dived to head Miralem Pjanic's corner past Francesco Bardi and Adem Ljajic doubled the hosts' lead in fine style on 26 minutes after some good work by Totti.

The 38-year-old collected a throw-in in midfield, turned and delivered a pinpoint pass for Ljajic to cut inside and beat his marker before beating Bardi with a fine strike inside the keeper's far post.

Roma wrapped up the points in the 32nd minute when Totti slammed a spot-kick past Bardi after Daniele De Rossi had been hauled down on the edge of the six-yard box by Dainelli as the pair tangled at a corner.

Totti came close to grabbing his second minutes later when he collected just outside the area, cut inside and curled a drive just past the far post with Bardi at full stretch.

Allegri must have feared the visit to Sassuolo having been sacked by AC Milan last January after defeat to the minnows from Reggio-Emilio.

After just 13 minutes, Juventus were trailing when Zaza beat Gianluigi Buffon with a first-time strike from the edge of the box after Leonardo Bonucci had cleared the Italy striker's shot off the goalline moments earlier.

Pogba was sublime throughout and levelled six minutes later when he curled Carlos Tevez's delivery past 'keeper Andrea Consigli and into the top corner for his first goal of the campaign.

Juventus went on to dominate at the Mapei Stadium, but were frustrated at every turn.

The champions spurned a series of great chances from Angelo Ogbonna, Stefan Lichtsteiner, Pogba and Tevez although Consigli was a rock in the Sassuolo goal.

Fernando Llorente was replaced by Kingsley Coman just after the hour and Andrea Pirlo came off in favour of Sebastian Giovinco with seven minutes remaining, but Juve's clear domination failed to produce the winning goal.

Juve's frustration boiled over when Simone Padoin was sent off from the bench for dissent.

Comments
Topics mentioned in this article
Sassuolo Juventus Roma Chievo Football
Get the latest Cricket news, check out the India cricket schedule, Cricket live score . Like us on Facebook or follow us on Twitter for more sports updates. You can also download the NDTV Cricket app for Android or iOS.