Santiago Solari has been promoted from his role as manager of the club's B team, Castilla, and took training for the first time. 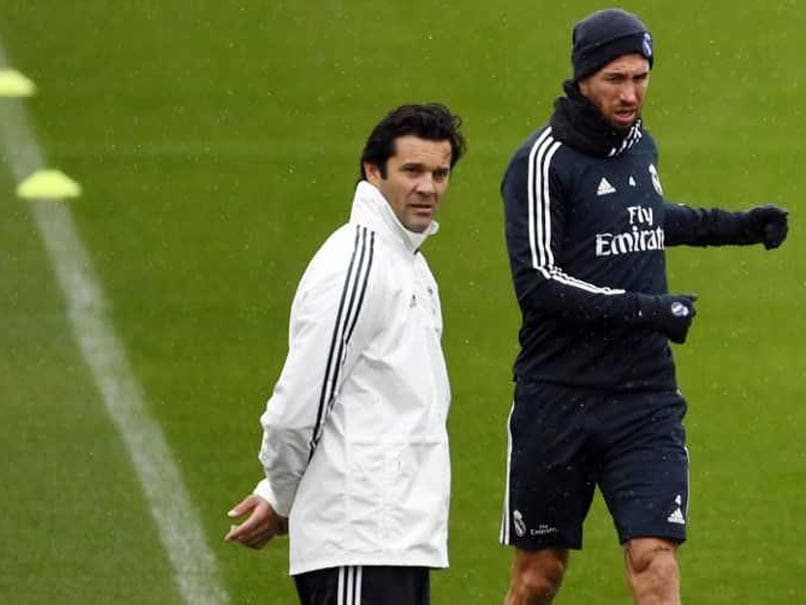 Santiago Solari said he is open to becoming Real Madrid coach long-term after being put in temporary charge on Monday following the sacking of Julen Lopetegui. Solari has been promoted from his role as manager of the club's B team, Castilla, and took training for the first time on Tuesday morning at Madrid's base in Valdebebas. The Argentinian, who spent five years playing for Madrid between 2000 and 2005, will be in charge for their Copa del Rey game away to Melilla on Wednesday. He has not ruled out becoming Lopetegui's permanent successor.

"I will do everything I can. It's a great opportunity and it's a great club. I don't just say that now as coach of the first team. I've been here with other teams, I've played and sweated in the shirt of this club.

"Madrid is bigger than all of us but it touches us all with its greatness. I want to be a part of it."

Solari is likely to remain in post for Real's La Liga game at home to Real Valladolid on Saturday and could stay on for next week's trip to Viktoria Plzen in the Champions League.

Madrid have sounded out former Chelsea and Juventus coach Antonio Conte but initial talks have reportedly not gone smoothly. Belgium boss Roberto Martinez and the club's former midfielder Guti have also been linked.

Solari, however, is the man in position and a run of positive results could turn opinion in his favour. Asked about his strategy against Melilla, he said "the idea is to go there and play with balls".

Lopetegui paid the price for five defeats in seven matches, the last a 5-1 thrashing at the hands of Barcelona on Sunday. Solari believes the players are determined to turn things around.

"They are hurting, obviously, but eager to reverse the situation," Solari said. "This is a group of champions, warriors, who have won many things. The situation is not the easiest, but I have seen them eager to change it."

Solari was keen to dismiss comparisons with Zinedine Zidane, who also stepped up from coaching Castilla, before leading Madrid to three consecutive Champions League titles.

"He's one of the greatest things we've ever had at this club," Solari said. "He's very calm, a great coach and nobody can compare to him."

Solari will be without Raphael Varane and Mariano Diaz on Wednesday, after Madrid confirmed the pair had sustained injuries against Barcelona.

Varane, who came off at half-time at the Camp Nou, has an adductor problem while Mariano has picked up a hamstring strain.

Any extended absence, particularly for Varane, would be a blow. After Plzen, Madrid face Celta Vigo and Eibar in La Liga next month, before a potentially decisive game away to Roma in the Champions League.

Barcelona Antonio Conte Football
Get the latest updates on ICC T20 Worldcup 2022, check out the Schedule and Live Score. Like us on Facebook or follow us on Twitter for more sports updates. You can also download the NDTV Cricket app for Android or iOS.