The fifth round of the English F.A. Cup offers a romantic if mind-boggling matchup between two teams called the Red Devils: mighty Manchester United and minor league Crawley Town. 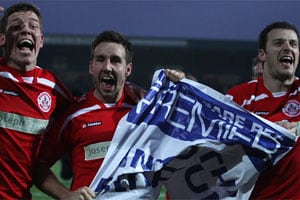 United is unbeaten this season in the Premier League and leads the standings by 5 points over Arsenal. Crawley Town? It is in second place in something called the Blue Square Bet Premier division standings, with a chance to move up from the fifth tier of English soccer to League 2 (the fourth).

The F.A. Cup is soccer's oldest knockout competition, dating to 1871. It is open to all soccer teams in English leagues, amateur or professional. Imagine an American basketball tournament that would include teams from the A.A.U., colleges and the N.B.A.

In the draw for the F.A. Cup's fifth round, on Sunday at Wembley Stadium, Crawley Town, the first Football League team in 17 years to advance this far, was drawn against those Red Devils from the northwest of England for a game at Old Trafford the weekend of Feb. 19-20. Pandemonium is certain to reign, even if Manchester United Manager Alex Ferguson is likely to field a team of first-team reserves and youngsters.

"It was just a surreal moment," Crawley's manager, Steve Evans, told The Guardian. "We got the tie that everyone in the country wants. The only nonleague club capable of beating Manchester United is Crawley Town as we stand today. Miracles do happen. I suppose if you are Arsene Wenger or Alec McLeish you don't want that draw - but we did. We will approach the tie in a really positive nature. This is going to be the biggest day in our lives, but we will give them the respect that Real Madrid gave them: the utmost respect."

On the way to the fifth round, the Round of 16, Crawley Town defeated Swindon Town, Derby County and Torquay United.

Crawley Town, founded in 1896, is from West Sussex, along England's south coast. The club has long been dogged by financial problems, but it recently became the recipient of support from still unknown benefactors who are believed to be businessmen in Hong Kong. The club spent about $800,000 on new players last summer and was at one time linked with the French international Robert Pires.

"If we were in the fifth round now, we'd want to be in the sixth round," Evans said. "That's the nature of the players we've got and the owners. We have highly ambitious people who have invested huge sums of money."

What is certain is that Crawley Town is headed for perhaps its biggest payday when it hits the turf at Old Trafford.

Over the years, the F.A. Cup has been the forum for some monumental upsets, but the last team outside the top flight of the English game to win the F.A. Cup was West Ham United, which beat Arsenal in the 1980 final.

Only five nonleague teams have advanced to the fifth round since the end of World War II, and Crawley Town will be the first nonleague club to reach the quarterfinals if it can oust Manchester United, according to the club's Web site. No final has been played between two teams outside the top flight, and the last team from outside the league to win the Cup was Tottenham in 1901 (Spurs did not join the Football League until 1908).

¶The Red Bulls of Major League Soccer are headed to Mexico this week for preseason training. The Red Bulls, who open the season against visiting Seattle on March 19, will train and play an exhibition match against Chivas Guadalajara on Feb. 15. The team's preseason will also take it to Fort Lauderdale, Fla., and to Phoenix for exhibition matches. ... On Monday, the Red Bulls announced the signing of their fourth homegrown/academy player, Sacir Hot, 19, a defender from Fair Lawn, N.J.

¶The United States women's national team will play its final match on June 5 (location and opponent to be determined) before leaving for Europe and the Women's World Cup in Germany. The team will set up camp in Austria to prepare for games against North Korea (Dresden, June 28), Colombia (Sinsheim, July 2) and Sweden (Wolfsburg, July 6). Unlike past tournaments, this year's will have no doubleheaders.