Ronaldinho released a song along with Brazilian singer Jorge Vercillo decrying corruption in their country. 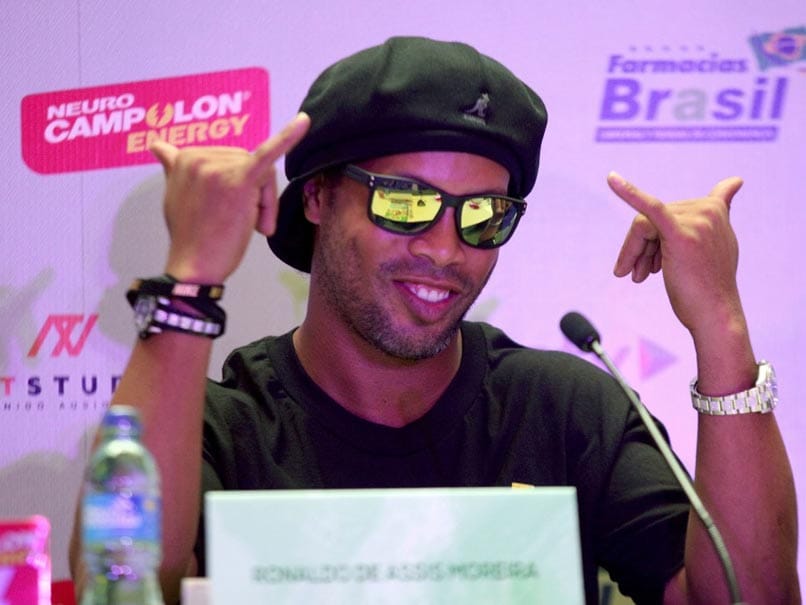 This is not the first musical outing for Ronaldinho, 39, who hung up his football cleats in January 2018.© AFP

Brazil's Ronaldinho has found a second calling after retiring from professional football: rapper. The former Brazil national and FC Barcelona megastar -- full name Ronaldinho Gaucho -- has released a song along with Brazilian singer Jorge Vercillo decrying corruption in their country. The 2005 Golden Ball award winner appears in a video, recorded in a studio, wearing a black beret and a white tank top emblazoned with the image of Saint George slaying a dragon. Halfway through the duet, he plays drums, then breaks out in a 30-second rap solo.

"Love is our game, from start to finish, in my heart there are no longer enemies," he raps.

Ronaldinho then asks the armor-clad Christian saint to slay "the dragon of greed" and corruption, while a chorus bemoans the squandering of public funds in detriment of "schools and hospitals."

This is not the first musical outing for Ronaldinho, 39, who hung up his football cleats in January 2018.

He has also performed with Tunisian rapper K2rhym, and was featured in the official World Cup 2018 song performed by Will Smith, Nicky Jam and Era Istrefi.

Ronaldinho even made a surprise appearance playing drums at the World Cup closing ceremony at Moscow's Luzhniki Stadium.

The famous midfielder however is not free of controversy: in November 2018, a court ordered that his passport and that of his brother Roberto be withheld for failing to pay a USD 2.3 million fine for environmental damage incurred during the building of property in Rio Grande do Sul, in southern Brazil.

And during last year's presidential campaign, he joined the far-right PRB party and threw his support behind their candidate Jair Bolsonaro.

Bolsonaro, who was elected on a sweeping promise to fight corruption, has faced his own scandals since taking office in January.

Barcelona Ronaldinho Gaucho Football
Get the latest updates on IPL Auction 2023 and check out  IPL 2023 and Live Cricket Score. Like us on Facebook or follow us on Twitter for more sports updates. You can also download the NDTV Cricket app for Android or iOS.