Barcelona and Liverpool meet again next Tuesday for the decisive second leg at Anfield. 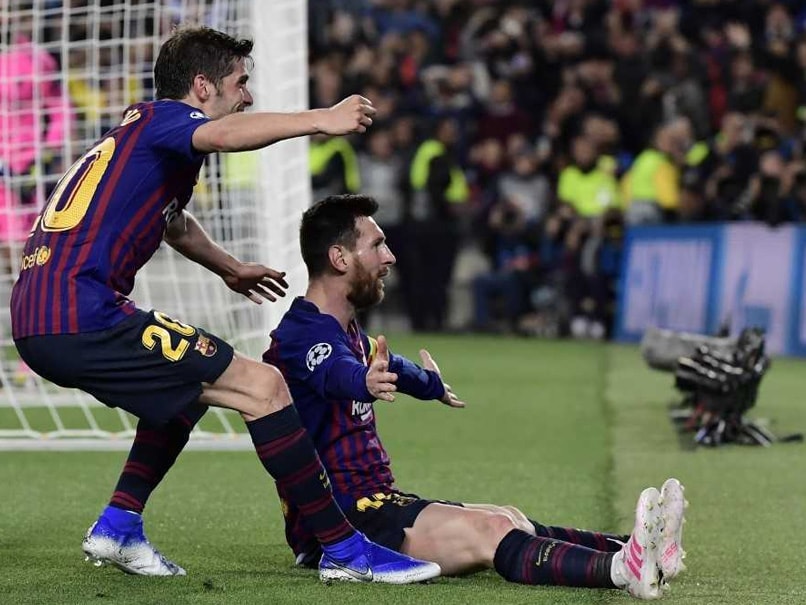 Lionel Messi's second goal was the 600th of his Barcelona career.© AFP

Lionel Messi put Barcelona to within touching distance of the Champions League final on Wednesday after firing a stunning brace to down Liverpool 3-0 at the Camp Nou. Former Liverpool striker Luis Suarez opened the scoring midway through the opening half of the semi-final first leg before Messi struck twice in seven second half minutes to leave the Reds with a mountain to climb in the tie despite an impressive performance in Catalonia.

Messi's second, an incredible long-range free-kick, was his 600th Barca goal in all competitions.

The two sides meet again next Tuesday for the decisive second leg at Anfield.

"How we caused them problems was outstanding," said Liverpool boss Jurgen Klopp.

"I don't know if we can play much better. But one moment there's Messi with an easy goal and the second was unsaveable."

Lionel Messi warned his Barcelona teammates that their place in the Champions League final is still not certain despite his two-goal salvo in a 3-0 semi-final first leg win over Liverpool on Wednesday.

"It would have been better to win 4-0 than 3-0 but it is a very good result," said the Argentine star.

"It's not definitive, we are going to go into a very complicated atmosphere, with a great history."

Messi's second goal was the 600th of his Barca career and he reached the landmark in stunning style, majestically curling a free-kick into the top corner.

"It was beautiful when it went in but I was lucky that the ball lodged up there in the corner."

Messi refused to take all the plaudits for the win which also Luis Suarez score against his former club.

"We must be more united than ever, all together: the team, the fans.

"We said at the beginning of the season that we will win it together."