Romario also criticized the Brazilian football confederation, saying it is 'corrupt'. It was some of the harsher words yet used by Romario, who has been loudly criticizing FIFA and local football officials since he took office in 2010. 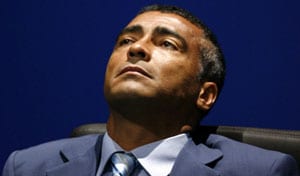 The comments from the former Brazil striker came at congressional hearing promoted by a tourism and sports commission on Tuesday.

He continued his attack against Valcke with a post published on his website on Wednesday, saying the FIFA official isn't the "best person to do business" with Brazil ahead of the 2014 World Cup.

It was some of the harsher words yet used by Romario, who has been loudly criticizing FIFA and local football officials since he took office in 2010.

"We can't expect anything from FIFA, where we have a blackmailer called Valcke and a thief called Blatter," Romario said while replying to a comment from a colleague who said FIFA should do more to make sure the World Cup will leave a legacy for Brazil. "They really don't represent world football, much less Brazilian football."

In his post, Romario said it's his role as a legislator to protect Brazil's interests and make sure the people know more about the FIFA representative negotiating World Cup deals in Brazil.

"Brazilian authorities shouldn't trust (Valcke) when signing any deal related to the World Cup," Romario said. "It is with lack of trust that I see his presence in Brazil negotiating with the money of the Brazilian people. Rest assured that I'll always keep an eye on what is being spent on the World Cup with public funds."

Romario said he published the post in response to Valcke's claim that the former Brazilian great has many times overstepped the boundaries of decency in his attacks. In an interview with Rio's Extra on Sunday, Valcke said Romario is "anti-FIFA, anti-Jerome Valcke, anti-everything."

He said Romario talks about him and President Blatter as the "worst people in the world," and doesn't expect to have a dialogue with the former striker in the run up to the World Cup.

"FIFA is open to talk to anyone, but I'm not going to go to Romario to ask him to speak with me," Valcke was quoted as saying. "He has said so many negative things about me, I don't see why I would go see him."

FIFA said it will not comment about Romario's remarks.

For a long time Romario has been outspoken against FIFA's influence in Brazil and the costs of hosting the World Cup. He has focused his complaints on the secretary general.

Romario said his mistrust was in part linked to FIFA's past problems with the now-defunct market agency ISL and the controversial replacement of the Mastercard sponsorship by Visa, a move spearheaded by Valcke.

Tuesday's congressional hearing was aimed at discussing the financial situation of Brazilian clubs, and Romario took the opportunity to again criticize the local football federation, known as the CBF.

Romario has led the calls for a congressional investigation into the Brazilian federation after president Jose Maria Marin took over from Ricardo Teixeira, who quit last year citing medical reasons amid widespread allegations of corruption and irregularities in his administration.

Comments
Topics mentioned in this article
FIFA France Football South Africa Mexico Republic of Ireland
Get the latest updates on ICC T20 Worldcup 2022 and CWG 2022 check out the Schedule, Live Score and Medals Tally. Like us on Facebook or follow us on Twitter for more sports updates. You can also download the NDTV Cricket app for Android or iOS.