Spain now sit seven points clear in Group F after preserving their 100 percent record as second-placed Sweden were held to a 1-1 draw by Norway. 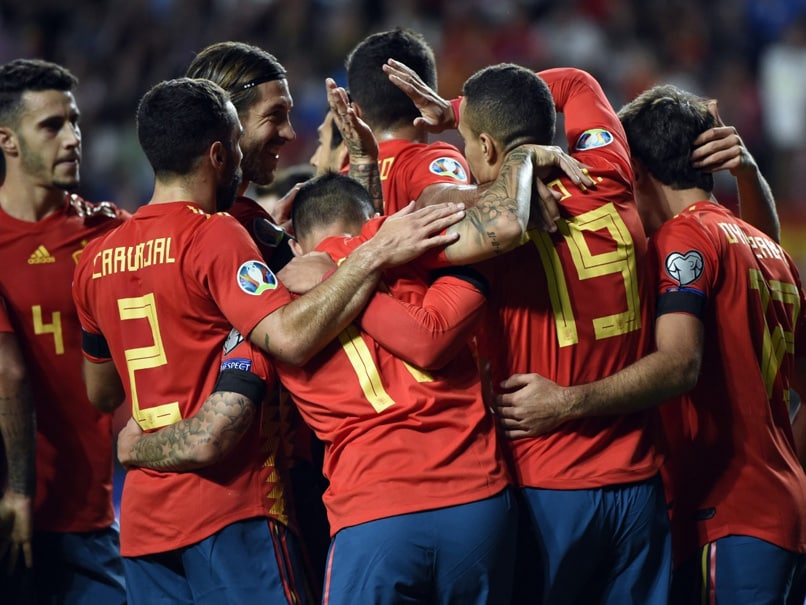 Rodrigo and Paco Alcacer both scored twice for Spain.© AFP

Rodrigo and Paco Alcacer both scored twice as Spain eased to a 4-0 victory over the Faroe Islands in Gijon on Sunday to make it six wins from as many Euro 2020 qualifiers and inch closer to next year's tournament. Captain Sergio Ramos equalled Iker Casillas' national appearances record with his 167th cap, but otherwise it was a low-key affair at El Molinon. Spain now sit seven points clear in Group F after preserving their 100 percent record as second-placed Sweden were held to a 1-1 draw by Norway.

"Yes, it's almost done, but not yet mathematically," said Spain coach Robert Moreno when asked if his team had all but qualified with four games to spare.

"We must grow as a team by winning all our matches. Of course, the final goal is qualification, but what matters is that the team has the feeling of doing things well."

There was a minute's silence before the game in tribute to former coach Luis Enrique's daughter Xana who died of bone cancer aged nine last week.

Moreno, who took over as boss from Enrique when the ex-Barcelona coach stepped down in June, made 10 changes to the starting XI which won 2-1 in Romania on Thursday, with only Ramos keeping his place.

The hosts wasted little time in taking the lead as the Faroes buckled under intense pressure in the 13th minute, missing several chances to clear the ball before Mikel Oyarzabal set up Rodrigo for a simple tap-in despite suspicions of offside.

Spain struggled to break down their stubborn opponents for the rest of the first half, though, despite away goalkeeper Gunnar Nielsen being forced into an excellent save to keep out Thiago Alcantara's spectacular long-range volley.

But Valencia striker Rodrigo put the game to bed five minutes into the second half, cutting inside from the right and drilling a vicious left-footed strike into the top corner with the aid of a deflection.

Despite having failed to score for his club so far this season and only managing eight goals in La Liga last term, the 28-year-old has netted five times in nine competitive internationals since the 2018 World Cup.

Joannes Bjartalid gave Spain a scare with quarter-of-an-hour to play, but David de Gea denied him a famous goal with an excellent save.

Instead, substitute Alcacer came off the bench to slot in Thiago's low cross in the 90th minute, before the Borussia Dortmund forward flicked in a near-post header to score his third Spain goal this week.

"Do I have a nose for goals? That's not for me to say, I just try to ensure that I take up good positions and then do my job," said Alcacer.

Spain next take on Norway in Oslo on October 12, before visiting Solna to face Sweden three days later.

Spain Rodrigo Paco Alcácer Football
Get the latest updates on IPL Auction 2023 and check out  IPL 2023 and Live Cricket Score. Like us on Facebook or follow us on Twitter for more sports updates. You can also download the NDTV Cricket app for Android or iOS.