Russia's football authorities vowed to step up the fight against racism Thursday after a fan threw a banana at Roberto Carlos in an apparent racial attack on the Brazilian former World Cup winner. 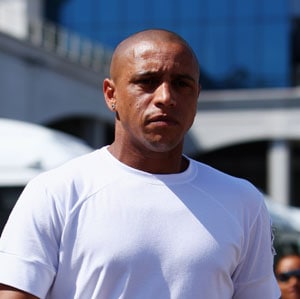 Russia's football authorities vowed to step up the fight against racism Thursday after a fan threw a banana at Roberto Carlos in an apparent racial attack on the Brazilian former World Cup winner.

Carlos, a defender for revamped Caucasus side Anzhi Makhachkala since February, received a pass from the goalkeeper and was about to passing it when a banana came flying from the fans, landing nearby.

The 38-year-old Brazilian picked it up and threw it back, walking off the field before the final whistle and raising two fingers at the stands, indicating this was the second such incident since March.

Both Anzhi and their hosts - Krylya Sovetov of the Volga city of Samara - denounced the insult and vowed to find the culprit.

"The stadium is no place for racism," Anzhi said in a statement after the match, demanding that the fan be identified and punished.

The banana-flinging came after another fan was pictured holding the fruit out to Roberto Carlos during a game against Saint Petersburg in March. Zenit was fined 300,000 roubles ($10,700) and banned the fan from its games.

Russia's Premier League issued an appeal to fans to prevent fellow supporters tarnishing the reputation of the Russian games.

"People allowing themselves such outbursts are sitting next to you at the stadiums. If you don't want your club to suffer, don't let them disgrace Russian football," it said.

Premier League spokesman Sergei Alekseyev said the league is ready to do everything to "change the situation" with discrimination against players, but added that legal prosecution is not always possible.

"The stadium in itself is a democratic environment," he told AFP. "The police can seize flares, but how can they seize fruit?" he asked.

Krylya Sovetov said on its website that it will "do everything to find and punish the scumbag who insulted the wonderful and respected footballer," while Russian Football Union head Sergei Fursenko said the union will investigate the incident and punish in the harshest way", in televised remarks.

Comments
Topics mentioned in this article
Roberto Carlos Acosta Football Anzhi Makhachkala
Get the latest updates on IPL Auction 2023 and check out  IPL 2023 and Live Cricket Score. Like us on Facebook or follow us on Twitter for more sports updates. You can also download the NDTV Cricket app for Android or iOS.