Robert Lewandowski on Saturday broke Gerd Mueller's 49-year-old record when he bagged a 41st Bundesliga goal of the campaign seconds before the final whistle on the last weekend of the season. 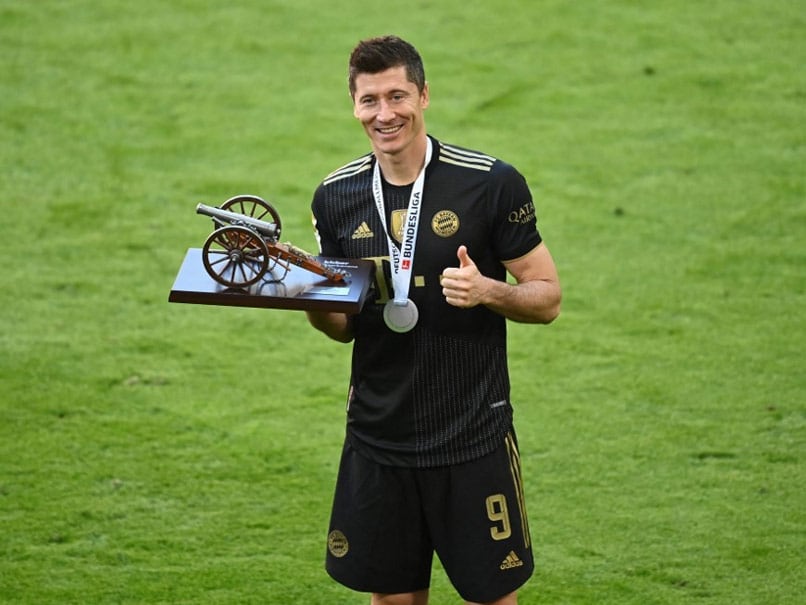 Robert Lewandowski scored his 41st goal of the season on Saturday.© AFP

Robert Lewandowskion Saturday broke Gerd Mueller's 49-year-old record when he bagged a 41st Bundesliga goal of the campaign seconds before the final whistle on the last weekend of the season. Mueller, 75, is suffering from severe dementia, but 'The Bomber' remains an iconic figure in German football as the Bundesliga's all-time top scorer with 365 goals, well ahead of Lewandowski's tally of 277. Many thought Mueller's record of 40 goals for Bayern Munich in 1971/72 would never be matched until Lewandowski rounded the goalkeeper to score in the same club's 5-2 rout of Augsburg on Saturday after equalling the record last weekend.

"It was tense until the last second, I would have liked to have scored earlier," a relieved Lewandowski told Sky.

"Sometimes you also have to stay patient, which was difficult.

"I always believed that a chance would come. That was a special and historic moment."

While Mueller scored his 40 goals over 34 league games in 1971/72, injury and squad rotation meant Lewandowski broke the record in just 29 matches.

At 1.84m and 79kgs, Lewandowski is a model athlete, renowned for his strict diet and training programme.

Mueller, at 1.76m and 80kgs in his prime, was nicknamed "short fat Mueller" by former Bayern coach Zlatko Cajkovski.

Lewandowski has hit the net on average every 60 minutes this season, while 'The Bomber' scored every 77 minutes in 1971/72.

Lightning reaction speed is another similarity.

Mueller was a copybook penalty box striker, who could transfer the ball from his right to left foot with bewildering speed.

His low centre of gravity helped Mueller steal an edge over defenders in the first few metres. Given a sniff of goal, he was an ice-cool finisher.

Lewandowski is just as dynamic, but in contrast to Mueller, he is happy to shoot from outside the box or use the space to outsprint defenders.

They share the killer instinct when the ball is near goal, often being alert to a rebound and waiting until the last second to pounce, as Lewandowski demonstrated on Saturday.

Lewandowski started 2020/21 with a bang, converting a penalty and providing two assists in an 8-0 thrashing of the Schalke, a record result for the opening game of a Bundesliga season.

He failed to score in the next game, a shock 4-1 loss at Hoffenheim, but provided all four goals, including a late match-winning penalty in a nervy 4-3 home win over Hertha Berlin last October.

He was rested for one game in late October after scoring ten goals in his first five games, then hit a purple patch with 25 in 20 league games.

A knee injury playing for Poland in late March left Lewandowski on 35 goals after a hat-trick against Stuttgart.

After three weeks out, he returned with a goal in the shock loss at Mainz before hitting a hat-trick in the 6-0 home win over Moenchengladbach which won Bayern the title.

While Lewandowski has scored consistently, Mueller had sporadic purple patches, netting just three goals in the first nine games of the 1971/72 season.

However, he had scored 18 goals by the halfway point, including four in an 11-1 thrashing of Dortmund in November 1971.

He then hit five goals in a 7-0 thrashing of Oberhausen which sparked a run of 16 goals in just seven games, finishing the season with six goals in three games.

"Gerd spread fear and terror in defenders", said Bayern assistant coach Hermann Gerland, who faced Mueller as a Bochum defender in the 1970s.

And almost half a century later, Mueller was in Lewandowski's thoughts when he scored at Freiburg last weekend.

To celebrate a record-equalling 40th goal, Lewandowski lifted his playing shirt to reveal a T-shirt with Mueller's face over the text '4EVER GERD'.

As Bayern star Thomas Mueller later insisted "without the goals of Gerd Mueller, the club wouldn't exist in its current form".